Joey "Shithead" Keithley is a vote-getter of the highest order.

At one of DOA's farewell gigs on Jan. 18 at the Rickshaw Theater in the band's hometown of Vancouver, BC, Keithley asked fans to leave their song requests in a ballot-type box at the door as they exited. Maybe they'd include some of those songs in their set the following night.

"We've got 250 songs. I'd like to play 'em all, but there's nothing I can do about that," Keithley told the crowd in his familiar gargling voice before the band ripped into another gem from their punk-rock catalogue.

The band played for about two hours that first night, opening the sold-out show with "New Age" and plowing through classics like "Slumlord," "I'm Right, You're Wrong," "General Strike" and many others before closing with "Disco Sucks" as the stage was littered with former members Randy Rampage, Zippy Pinhead, Wimpy Roy and other Vancouver punk luminaries. (A new song, "He's Got a Gun," was also a standout from DOA's killer new album, "We Come in Peace.")

At the end of next month, Keithley, age 56, will be seeking votes of another kind as he'll put DOA to rest after 35 years to continue his campaign for a spot with the BC New Democrats. He's running to be a Member of the Legislative Assembly (MLA), which is similar to a U.S. state congressman.

One night, Keithley's rocking the crowd and the next day he's knocking on someone's door to introduce himself and discuss his political platform.

I spoke with Keithley on Jan. 14 by phone from his home in Burnaby, BC. 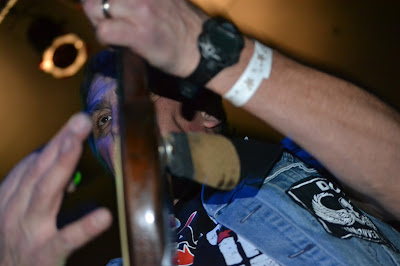 --You're gonna be putting the band aside to concentrate on your political career. Is this a tough decision for your or are you fully set on the next part of your life?

The toughest part was committing to the idea because I had considered running for city council in my hometown here... I live in Burnaby, the first suburb east of Vancouver. The place I'm actually running in is Coquitlam, which is the next suburb.  I had considered this about 2-3 years ago, but there wasn't the opportunity to run within Burnaby. So, I did not find this a tough decision, it was just sort of picking the right opportunity and go ahead with this and, like you alluded to, I'd say it's a natural transition in my life.

In one sense, yeah, of course I'll miss rock and roll. How could I not after being involved for 35-38 years or something? 17 years old or whatever when I picked up a guitar, but this is what I choose. Just as an aside, I won't stop playing music. I'm just busy with this.


--How has being in a band all these years prepared you to jump into the political realm. Was it a good learning experience, a natural progression type thing?

Well, it made sense. People in Canada, and I think people in North America and in Europe somewhat know DOA for a political stance-- I'd really call it being a social activist. You know, kind of fighting for people power, that's kind of what I call it. So with people in BC, I'm really well known here, so it isn't like a big leap to do that, so it kind of fits because I've been kind of working on helping people with stuff, trying to help the regular person all my life. I guess another thing, too, is when I was 18, I went to university to become a civil-rights lawyer. Then DOA started, and obviously I never got my law degree (laughs) ... that goes without saying, right?


--So is that when you first started getting interested in politics? When did it strike a chord with you?

It was actually when I was 16, Greenpeace organized this protest against testing of nuclear weapons by the U.S. military, and what was happening in the Amchitka islands, which are part of the Aleutian Islands chain of Alaska ... underground testing of nuclear bombs. So, Greenpeace urged all these kids in high school here, in different areas, to leave their school and march downtown Vancouver where the American consulate was and march around and protest. We did, we left the school, the principal tried to stop us with his arms across, trying to physically block us. That didn't work, obviously, and about a thousand of us marched downtown. An interesting thing about that was Dimwit -- rest his soul, my old drummer, who drummed in The Subhumans, The Pointed Sticks and The Four Horsemen -- he brought a bass drum that day, so he was at the head of the parade with his bass drum, beating as the students moved along toward the consulate. 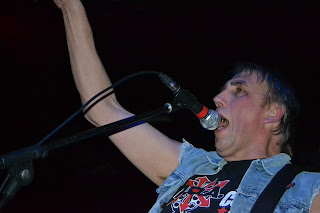 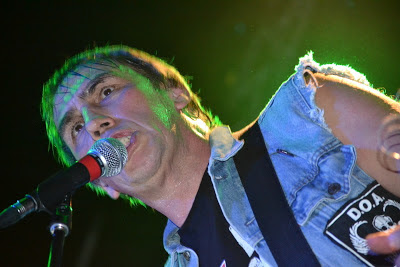 --What do you hope to achieve if you're elected? What's your platform?

Some really straight forward things... there's nothing too wildly spectacular. One of the big things I'm working on is educational access for everybody. I believe post-secondary education should be a right, not a privilege. We wanna improve the school system, university system and skills training like trades: electricians, plumbers and stuff like that. An educated population is gonna end up having better jobs than a bunch of Mcjobs, (which) is what people are ending up with now. There's nothing wrong with being a barista, I certainly wouldn't look down on anybody who worked at any menial job. But at the same time, you'll never be able to buy a house or raise a family if that's the kind of job you got-- it's just impossible.

The other thing, too, is I'm trying to encourage people (to get) democratically involved. And this is part of the thing about being a DIY guy and as I was growing up being a punk. Being involved democratically is a lot more than just going to the ballot box once every four years. People should be after their local and statewide, national politicians to listen to them, which they generally don't... politicians generally thumb their nose at the general public. And I really think you can get this kind of grassroots democracy that people would seem to accept... that's kind of attracting the opposite of the Tea Party, I know their thing is based on a grassroots thing, 'down with politicians' and all that kind of stuff. I'm talking about more of a grassroots thing where things make sense and are not just right-wing hysteria like the Tea Party is.


--I know that you had run before for the Green Party. What have you learned from that previous political experience that you're applying this time?

What I've learned and what I'm gonna apply here is what I've learned more in music as opposed to my previous political experience --  is that 1: if you wanna be elected, you should learn to listen to people. I've really learned that in the music business, my own record company, being a manager, being a road manager, playing in a band type thing. You have to employ those people skills and listen to people and try and help them. Because when you get elected, you get elected to serve all the people, not just the people that voted for you or the people that agree with you. 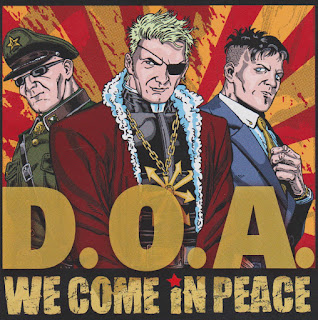 -- Getting back to DOA now, are there some top songs that you still really feel have an impact on you today and have really stood the test of time?

I really just go by the audience. There's some that I really like, say "Woke Up Screaming" is one of my personal favorites. Lot of the old songs that we still play like "The Enemy," "The Prisoner," "World War Three," stuff like that. There's one on the new album I really like that we play all the time is called "He's Got a Gun." It's tough to say, I've written probably 250 songs, we've got 14 albums, singles and comps and various odd things. It's a little hard to narrow it down.


--What kept you guys going all these years?

DOA is really held together all these years by many rolls of gaffe tape (laughter).

It's really a political philosophy, I guess. One of the big things about DOA, there always had to be a sense of camaraderie, being friends with the other people in the band. My philosophy really is just to get up there and try and enact change. One that I really take as my example is one of my heroes would be Pete Seeger. That guy has been going at for a good 70 years doing great things for people from being an activist, to being a great songwriter, to teaching people music, reviving folk music at various times. Just doing a lot of really, really cool stuff with his voice and his banjo and his ability. So if I can end up doing a quarter of what he did, I think I'd be doing really, really well.

Once I'm finished with politics, I'll be back playing music at some point, but who knows what form it will be in.


-- You've done a great job so far, and I would imagine you're gonna keep doing it.

Thank you very much. 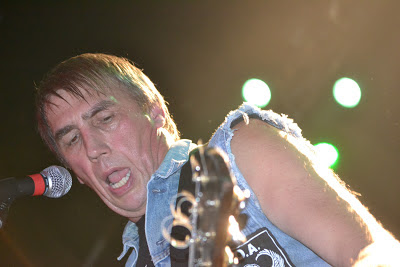 They're all behind the band. It's not really their style of music, except for my youngest son, Clayton (16), he's a budding filmmaker. Me and him actually jam in the basement-- I drum, he plays guitar and sings, and we play Ramones, Clash, Damned, Sex Pistols, stuff like that. But the older kids weren't really into punk rock per se, but they're proud of me, and they're totally behind this political thing. Especially my daughter, and she's not political at all. I asked when we were around the family table, I asked 'Should I do this?' and everybody's saying, 'Oh, I guess so,' and she went 'Yeah, Absolutely. Absolutely.' (laughter)


-- If you could look into a crystal ball, how do you envision your future?

Ahhhh... (laughs) ... I wish I could look into a crystal ball. You just gotta keep trying to do what you think is right in life and carry on the best way you can, that's really the only philosophy I've really got is that you've got to believe in yourself and be positive.


-- NHL hockey is back, are you excited? Are you a Canucks fan?

Yeah, I've been a diehard fan since before they were in the NHL, the Canucks. They've never won a Stanley Cup-- so it's not a great thing. I kind of get excited about hockey because we do, we call it a Hockey Pool, basically it's a fantasy league. So me and a bunch of other guys in the music business, we've had this Hockey Pool going for about 25 years now. It's our big competition-- we are cutthroats, we're meaner and more underhanded than NHL owners, so we try and really screw with the other guy. It's really a lot of fun.

I was actually glad the NHL didn't go the first half of the season, because I was too busy campaigning.


-- What was your take on the lockout?

It's a bunch of millionaires getting stiffed by a bunch of billionaires. They've all got so much more than 99.9999999 percent of us do-- it's pretty sad that they would fight over this. It's really sad the people that work at the arena or sold hot dogs and all that kind of thing, they really lost a big chunk of their livelihood. They seem to like to do this every six or seven years--- it's not very smart, but that's the way it goes.