'We Got Power': Photos and memories galore for your slam-pit-reading pleasure | Book Review 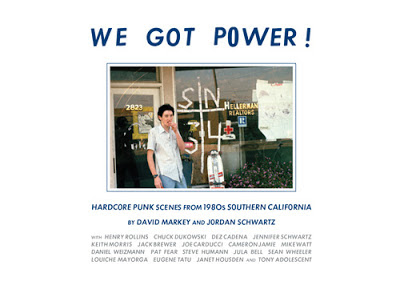 It was just a typical Saturday night, of course: I was sitting around with nothing to do when the phone rang. Husker Du was in town and Bob Mould asked me to accompany him to Santa Monica to meet with some friends.

A few minutes later, the Husker van rolled up Steinhart Avenue in Redondo Beach, I hopped in and we hit the liquor store for some tallboys of Olde English 800 — the punk-rock beer of choice in 1983, for sure.

What would the night bring? After all, I didn't know who these Santa Monica characters were or what they were up to. We just rolled along to our destination and chatted about music, sports, whatever.

Turns out it was the "We Got Power" guys — Jordan Schwartz and David Markey — who were waiting for us to arrive. They were more than ready to crack some beers and hang out for the evening.

I'd seen their fanzine and, after meeting them on this night, recalled seeing the duo lurking around the SST office on Phelan Avenue in Redondo once or twice. (In fact, I've still got "We Got Power" No. 1 — a folded copy since I stuffed it into my jeans back pocket after receiving it at a gig.)

On that Santa Monica night, Markey answered the door, greeted us and led us into his family's home. He told his mom, "This is Bob from Husker Du." She politely nodded. I blended into the background, not getting a royal introduction from David, when Bob turned to me and said to the Markeys, "And this is Andy." That was cool, I thought.

What's even cooler — some 30 years down the road — is that Schwartz and Markey have unleashed their mammoth book of punk photos and essays, "We Got Power: Hardcore Punk Scenes from 1980s Southern California." (Bazillion Points)

It's four pounds, 304 pages and 400 photos full of hardcore memories from back in the day when me and thousands of other punks took to the clubs and witnessed raging bands, guzzled cheap beer and met like-minded fans and band members to bond with on those crazy nights. Henry Rollins, Keith Morris, Chuck Dukowski, Mike Watt, Tony Adolescent and many others tell their tales via essays in the book, as well.

Inside the book, you've got your mainly black-and-white photos of the biggies like Black Flag, Minutemen, Circle Jerks and others, but what strikes me the most is the snapshots of the smaller bands and fans who were just your regular folks — fucking bent on having a great time. They were just like me and my hardcore associates from the cities of Redondo, Hermosa, Manhattan, Torrance, Inglewood, Gardena, Hawthorne, etc. We were all in it together. (In essence, the members of the larger bands were on our same level, as well, just more well known in the scene.)

We'd hop into cars and drive to the Whisky, Florentine Gardens or the Palladium in Hollywood. There was Godzilla's in the armpit of the San Fernando Valley. Dancing Waters was the spot for your punk pleasure in San Pedro. The Barn at Alpine Village in Torrance hosted some of the best shows of that era, notably a Dead Kennedys, Minor Threat, MDC, Zero Boys and Detonators stunner.

Sometimes, things got gnarly like when the owners at Bob's Place in Watts made us all stay inside because some locals were apparently looking for punk blood outside after a Misfits, Necros, Social Distortion, SVDB gig.

At another Misfits gig in a sketchy area of LA, me and my friend John along with Chris and his girlfriend Julie (Sin 34) looked on with shaking heads as cops cleared out locals outside so we could make it to our cars. (It was a miracle we even found the venue in the first place — our only clue was some kids holding a mattress outside a window upstairs that read PUNX, the gig organizer.)

Inside "We Got Power," a handful of those clubs are represented with bands playing on their stages. As I scroll through the book, I'm transported back to those days, and in some of the photos I know that I'm not that far away from the where the camera lens hit its mark.

What was I wearing? What did my hair look like? Was I a shy boy in the background or an energetic youngster up front singing and thrashing along with the band?

Answers: Flannels and homemade band T-shirts… hair short and a bit spiky due to my cowlick … and a little bit of both in the demeanor category.

What mattered, though, was that I was living it up, straddling the line between euphoria and danger on some nights.