Wherever we turned today, Black Flag was there.

This afternoon, we rummaged through some boxes and found some old pics from an LA Times article from the epic Black Flag, Adolescents, DOA, Minutemen gig on June 19, 1981 at the Santa Monica Civic. Andy attended this gig and stood stage left with his brother, Ed. 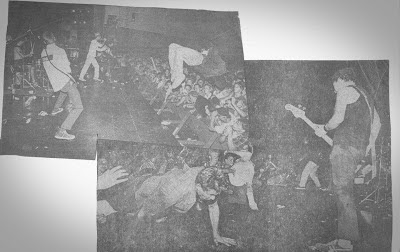 Later, while watching the UCLA men's basketball team defeat the University of Arizona, 74-69, on TV at the Triangle Pub in Seattle, a commercial break brought us a Bruin short, "The Optimists," featuring a clip of graduate Greg Ginn shredding away during an old gig mixed in with other notable grads. Cat's a UCLA grad,  as well, along with her mom, Joan.

And then, prior to the Seattle Sounders FC soccer match versus the Montreal Impact tonight, a massive sign was raised in the crowd emblazoned with the words, "Rise Above." Cat and I were in attendance, we looked at each other and nodded our heads-- how fitting, right? Unfortunately, the Sounders lost, 1-0.

Cat's phone ring has been Black Flag's "Rise Above" for a few months, too, apparently in sync with all the recent Black Flag and Flag news.