And if there ever was a slab of vinyl that should be massively celebrated, it's certainly Die Kreuzen's rip-roaring, paint-peeling "Cows and Beer" 7-inch EP. It severely and pleasurably gave my ears a beating back when it was first released in 1982 through Version Sound.

You could play that thing about nine times continuously in an hour — and you'd still want to revisit it again… and again and again! It's safe to say that my friend John's vinyl copy of "Cows and Beer" got a workout that summer as we sat in his Redondo Beach, CA bedroom and soaked up the intense tunes.

And now it's Beer City Skateboards and Records' turn to bring "Cows and Beer" back to the public's ears with an official re-release in special remastered 7-inch and 12-inch deluxe editions on April 19, 2014. 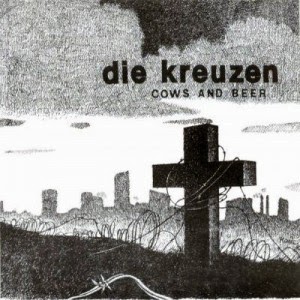 According to a Beer City press release, the new release will feature much improved sound quality and will be pressed on four different colors of vinyl.

"We are doing this because we want to squash the bootleggers," said Die Kreuzen singer Dan Kubinski in the press release. "For years, they have been putting out inferior-quality bullshit and ripping off our fans. We want to give our fans a very clean, crisp, loud-and-heavy version of 'Cows and Beer.' Billy Cicerelli from WMSE did the remastering  — and man, did he do an awesome job! His new version blows the doors and windows off of any other, including the original Version Sound release."

Circerelli remastered the recordings from the original reel-to-reel tapes at Hi-Top Studios, Milwaukee, Wis. Lacquers for both vinyl editions will be cut at Lucky Lacquers by Dave Eck, a seasoned industry veteran based in Middleton, Wis.

The new edition will feature the original lyrics and liner notes, plus new liner notes and photos from '82.

As a bonus, the 12-inch version will include a comic book from the masterful hands of Brian Walsby, who has drawn countless punk record covers, fliers and released a handful of books over the last 30 years.

When John and I finally got to see Die Kreuzen in the flesh at the Cathay De Grande in Hollywood in 1984, Walsby was there, too, journeying from his home in Simi Valley.

It was a chaotic and stellar show for the ages, to say the least.

Cat and I caught the Die Kreuzen guys last April at the Roadburn Festival in Tilburg, Netherlands, and it was another dominant gig from the Milwaukee crew of Kubinski, Keith Brammer on bass, Jay Tiller on guitar and Erik Tunison on drums. (Herman Egeness played guitar on "Cows and Beer," but has handed over guitar duties to Tiller.)

So, thank you Die Kreuzen and Beer City for putting this record back in people's hands again. Let the face-melting resume.