Raise your pint: The Number Ones come rockin' out of Dublin

If you want the lowdown on Dublin, Ireland's The Number Ones, vocalist/guitarist Seán Goucher is here to help.

Their sound is "like keys being cut in the wind." Their songs are "like butter melting in the freezer." And their lyrics are "like scraping burnt toast into a sink."

In short: It's fuckin' great.

The band leaped out of the gate about two years ago and also includes Eddie Kenrick (26) on vocals/guitar, Cian Nugent (25) on bass/vocals and Conor Lumsden (19) on drums/vocals. Goucher is the elder statesman of the band at age 27.

The Number Ones' self-titled debut album is now out on Static Shock Records of London and Deranged Records in Canada. It's a 10-song corker and well worth tracking down.

Here's an email interview with three of the guys. It's serious ... and loaded with laughs.


* Give us some history on the band and any interesting facts about the band and members (serious and humorous are OK!).

Seán: About two years ago, Eddie and I wrote some songs and demoed them in my parents’ attic with my little brother on drums. Those songs became our "Italia ’90" tape. Around that time, we had various friends helping us out live before Eddie’s old friends Conor and Cian joined the band. We all live in Dublin city and live in a house together, Monkees style. The neighbours don’t like Conor and constantly tell him the music he listens to “isn’t music.”

Cian: The band was formed in late 2011 early 2012 and after a couple of lineup changes we settled into being the proud family we are now. I've known Conor all my life as he's my younger brother, I taught him how to skate and dyed his hair blue when he was 10. I've known Eddie since he only drank flagons of cider and had to come up to Dubin from Portlaoise and sleep on our sofa. Goucher I had heard of because my friend fancied him but never met till we started this band because he was from Tallaght. We regularly all socialise together around the Dublin live music circuit. 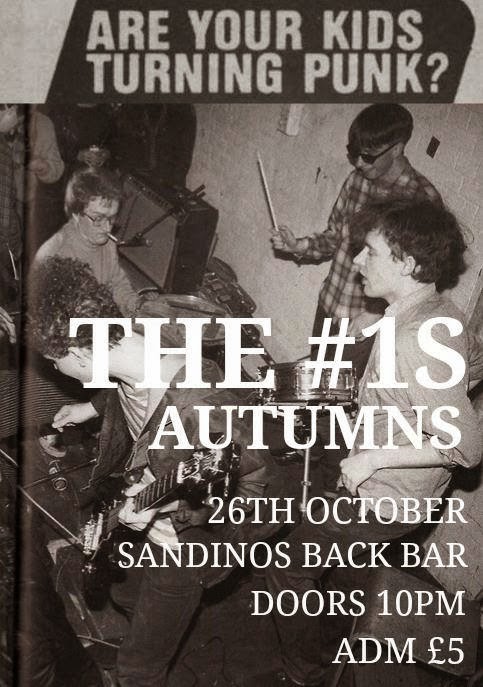 * What were some of the first Irish punk bands (or worldwide) you heard? Which ones are your biggest inspirations to form a band?

Eddie: The first Irish punk bands I heard were Stiff Little Fingers, The Undertones and I guess Therapy? if they count. I got into Therapy? through my older brother and SLF via a lunatic neighbour. At some point a bunch of these bands and a broad selection of Irish indie and rock bands were featured on a 2 CD compilation that I reckon every home in the country owned. I loved knowing that all these bands had come from so close to where I grew up, Ireland being such a small place.

The first punk bands I got into more generally were probably all that stuff that got big in the early to mid '90s, again via my brother. Green Day, Offspring and Nirvana were the first bands I really got into, and as most enterprising kids will do, I read anything I could find about these bands which led me to NOFX, Rancid, Bad Religion, etc., which in turn led to Minor Threat, Black Flag, Bad Brains and so on and so on.

I've played in hardcore punk bands for I guess maybe 6 or 7 years and it was mainly during this period that, through the friends I'd made through the punk scene, I started finding out about more and more great melodic punk bands. I've always been really obsessed with melodies in songs as far back as I can remember, and the deeper I delved into these old punk/power pop/garage compilations and singles the clearer it became I'd happened upon a goldmine.

In terms of biggest inspirations to form a band, it's hard to really say. I think I remember seeing Buzzcocks on TV when I was 15 or so and thinking that looked really really fun. That was probably as influential as anything really.

Seán: It was through compilations that I got into a lot of the Irish stuff, too. Bands like The Undertones, Stiff Little Fingers, The Blades and The Golden Horde and then later the Good Vibrations stuff. In terms of inspirations for the band, starting out we were listening to a lot of Buzzcocks, Mick Jones’ songs in The Clash and compilations like Pebbles and Nuggets.

Seán: Our first gig was shortly after we got going and was in a venue in Dublin below The Lower Deck pub. We were pretty nervous and turned the amps up quite loud to drown out the lyrics. It didn’t matter much since the front row was full of people I had never seen before singing along to our songs, which was a bit weird.

Cian: First gig we played as this lineup was a two-in-one-night job. As far as I remember, both were very drunk and fun -- probably sounded pretty crappy. Since then we have really knuckled down and focused on our craft and turned into the powerhouse we are now. Around a year ago, Eddie insisted we rehearse 6 hours a day, and since then we've really started to get good.


* What have been some highlights for the band thus far?

Eddie: I think a highlight for me personally was a blazing argument mid-set that was all my fault followed by emotional apologies/general strengthening of friendship, and later that night Cian leaving our pal Myles Davie's house to go for a smoke, getting lost, getting on a bus, putting me on the phone to the bus driver, getting another bus, hopping a tube and being found by our friend Sam a few hours later wandering around the opposite side of London wearing no shoes.


*  Any interesting story behind the name? What makes you lads No. 1 as opposed to runner-up or an honorable mention?

Eddie: There was already a band called The Pisses

Seán: I can’t fully remember but I know I wrote it on a CD-R for Eddie with recordings we’d done but I’m not sure if it was a Big Star or Prisoner reference. It stuck in any case and now we are very hard to Google and Tweet about.


* What's the Dublin scene like nowadays? What are some other hot bands and clubs, etc?

Eddie: Cian's other band Cryboys are the best band in Dublin.

Seán: There is a good scene in Dublin at the moment, which is nice. Some bands worth checking out are Faux Kings, Exploding Eyes, September Girls, Sissy amongst others.


* How has your music been received around the Dublin area and elsewhere? Are you making an impact with your music?

Seán: Dublin has always been good, though anywhere we’ve gone we’ve had fun and been received well. In terms of impact, it’s kind of hard to quantify because everything moves so slowly in terms of releases, or at least it feels that way. At the start, everything moved a lot quicker because we recorded and mixed the tracks in a day and duplicated tapes the next, so anything longer than that feels like an eternity. Our album is only just out now so it will take a while before any impact is noticeable. Our mams all like us though.

Cian: Our aim was never to make impact, other than on the band we're opening for's rider. If you steal their leftovers, you can live off it for days and get really drunk that night. It's so good getting free beer because in Ireland beer in a bar is really expensive, you know you're looking at like 5 euro for a pint. Sometimes the band beer runs out and you have to drink their whiskey or something, which is a surefire way to puke.