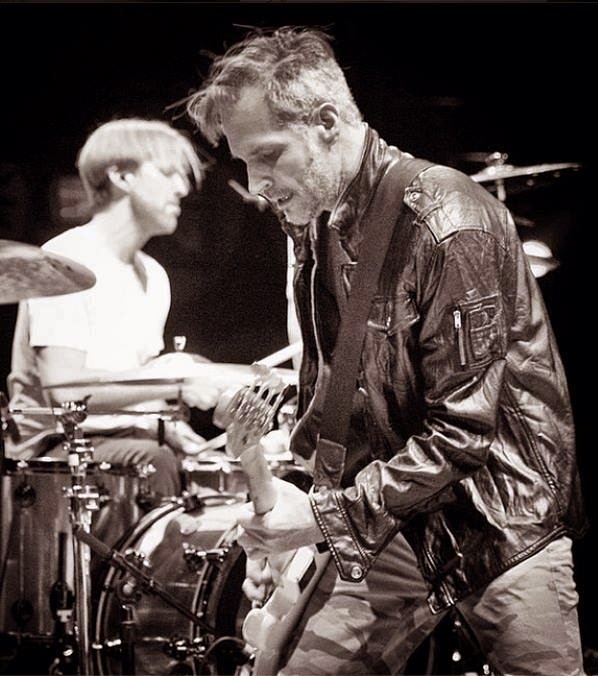 When the debut Bad Religion EP hit my turntable in 1981, I was floored.

It spewed rage, melody and intelligence through its grooves and out of the speakers of a stereo that was already on its last legs - and I'm surprised now that it didn't fall to pieces when those six songs were finished. It surely would have been a victory for punk rock, right?

The sound was raw and powerful, the vocals were jarring and yet comforting at the same time. It was a solid blend of punk and rock - right up my alley; I reveled in the hardcore stuff in Los Angeles and beyond, too, but that Bad Religion EP was a go-to record.

And Jay Bentley's bass was killer, gluing everything together and giving "Slaves" a kick in the arse with a brief, driving intro.

I saw them live for the first time in 1982 at Godzilla's in the San Fernando Valley of LA alongside Symbol Six, Minutemen, Descendents and Sin 34.

A solid bill, of course, but it was Bad Religion that me, my brother Ed and a few friends were more stoked to see than anyone else. Bentley and crew were spot on that night and the tunes from the EP and "How Could Hell Be Any Worse" were finally realized for us in a live setting.

We'd see them a few more times after that and I was always drawn toward Bentley's side of the stage to get the low end firmly wedged in my ears.

So, here you've got Bentley in the present day discussing the bass players who had an impact on him. Read on:


10. Dee Murray - Elton John. His talent for finding the lines in a piano-led band are phenomenal. Elton had a pretty mean left hand, which freed up a lot of space in the middle of the fretboard that I think Dee used very tastefully. He may have been the first player I absolutely recognized as "refrained."

9. Berry Oakley - Allman Brothers Band. I know the Allmans were considered "southern rock," but when Duane was alive, they were the best, and maybe only, band doing what they were doing... justifiably the only good "jam band." I thought Berry was so good at keeping it together with two drummers and a slide-guitar player - very busy in the frets, but it never felt muddled.

8. Peter Hook - Joy Division / New Order. He changed the main focus of the "bass" from the low notes to high ringing notes. Everyone had gone there, but Hook STAYED THERE. Not that I would ever want to imitate that, but he made it possible for me to go there if I wanted. I remember distinctly the first time I heard them... "he can't do that, he cant do that! but he is doing that" and I still think about that to this day.

7. Bruce Thomas / Davey Faragher - Elvis Costello. We'll leave all the legal mumbo jumbo and personal issues out of it. They are both wickedly talented and have an ability to push and pull songs within the framework of Costello's guitar stabbings and Steve Nieve's organ. I think Bruce set the bar so high for what a "punk rock" bass player could be, and Davey, with his own credentials, stepped into that role seamlessly and in fact did some things on his own that were breathtaking. The entire "Delivery Man" album is perfectly executed.

6. Steve Soto - The Adolescents. There were a half dozen or so of us that stuck together early on to learn from each other. Steve had chops and could sing like a motherfucker. Another bass player stuck between two great guitar players, he found and played the most musical lines. Really taught me a lot about harmony between all the instruments.

5. Fat Mike - NOFX. Not really appreciated for his bass playing as much as his stage antics, Fat Mike has developed a style that is so unique it's almost impossible to duplicate. Since he is a songwriter, he gets to intertwine guitar and bass parts and make incredibly complicated parts seem effortless. He's also the only person I know who can make that goddamned Danelectro bass sound good!

3. Lemmy Kilmister - Motorhead. He's just a badass. Everyone from Gene Simmons to Sid Vicious were just wet puppets compared to Lemmy. Not the best, but the loudest, not the most technical, but will smash your face with sheer brute force. The epitome of a rock and roll bass player. Untouchable and unfabricated, unapologetic and quite frankly one of my ideal role models.

2. Paul Simonon - The Clash. Art student naively learns to play bass guitar in such a way that he makes it accessible for everyone! Fucking punk rock! Now add the cool factor and the whole package becomes everything I want to be. My de-facto target player when I'm in doubt.

1. Sir Paul McCartney - The Beatles. Most underrated bass player ever. Maybe the best ever. The absolute perfect union between guitars, vocals and drums. Don't care what anyone says, you're wrong... in my humble opinion. Sir Paul McCartney is ground zero for almost every bass player today, even though they wouldn't know it.
Posted by Andy and Cat Rose at 6:26 PM