Originally posted in the Los Angeles Beat on Nov. 12


The Dangerhouse Records night presented by Part Time Punks (with an assist from Frontier Records’ Lisa Fancher) at the Echoplex on Nov. 9, was one of the finest Old Punkers Nights in memory. These events, in which multiple participants from the good old days get their teenage bands back together, take place fairly frequently in LA, but the gathering in one place at one time of this particular crew felt special. During its three-year existence at the end of the seventies, Dangerhouse was THE essential LA punk label, documenting the earliest warblings of the Weirdos, X, the Dils, the Deadbeats, the Bags, SF-based kindred spirits the Avengers, and multiple others, providing the most concrete physical evidence of that particular space and time. (Frontier has reissued the catalog twice, most recently as a 2-CD set containing the complete run.) While the people on stage were mostly pretty up in years, there was an appealing refusal to grow old gracefully, or politely, on display.

Though the Alley Cats’ Randy Stodola was playing up a storm, the band’s set was hampered by a muddy, overly bass-heavy sound mix, and the members seemed to have trouble hearing each other.  Things improved slightly for the proto-hardcore Rhino 39 from Long Beach, playing its first gig in two decades. Opening with a cover of the Randoms’ “Let’s Get Rid Of New York”, they inspired the day’s first circle pit – how inappropriate for the period, why wasn’t anyone doing the Worm? I noticed that the manner of dress and hairstyle favored by Rhino’s guitarist was exactly the same as Black Oak Arkansas’, who I’d seen just two nights earlier.

The same can’t be said for the Deadbeats, who don’t look like any other band. One of the scene’s most singular and musically progressive acts, they rip me a new one every time I see them play. Their sound owes more to the Mothers of Invention than anything most people would call punk rock, and maybe because of that, they always leave a big impression at these gatherings. Their current lineup matches original vocalist Scott Guerin with drummer Joe Berardi, bassist David Jones, keyboardist Paul Roessler, sax player Tony Atherton and guitarist Harry Cloud, with occasional appearances by vocalist Nurse Heather Galipo. Guerin remains a charismatic frontman, one that doesn’t need a suit made of penises to draw attention to himself, but who will wear one anyway, because too much is never enough. 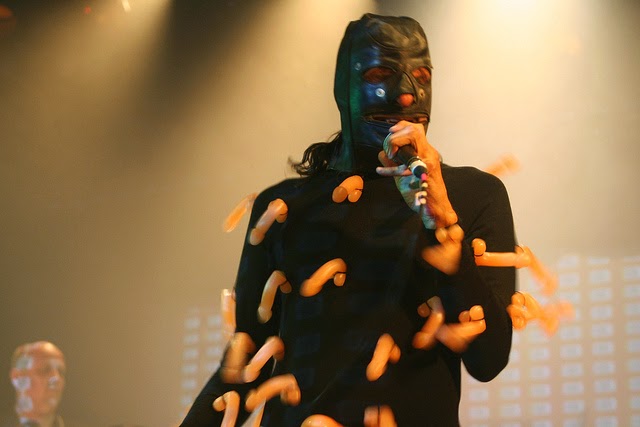 The latter half of the set included original Deadbeats guitarist Geza X, joining Guerin onstage for the first time since the early 80s. Looking adorable in his pastel dress, Geza started with his song about the Austrian artist Herman Nitsch, a “funny little man” who famously got the young-punk residents of the Canterbury Apartments to be part of a performance art piece from hell, involving crucified farm animals whose blood was poured into the mouths of the unsuspecting volunteers. He stayed on as the band went through much of their 70s catalog, reaching its high point with the iconic “Kill The Hippies.” This might be the OG LA band most worthy of rediscovery today – come and get ‘em, world.

It was the set by the Avengers that cut most deeply, at least for this writer. Coming off a week where reporting of current events was making me want to start drinking heavily, it was downright uplifting to raise a fist and sing along to “The American In Me,” to hear this song written ages ago that speaks very precisely to the moment we’re living in right now. It certainly helps that singer Penelope Houston and guitarist Greg Ingraham are both performing at a level that matches the intensity of the old recordings, joined by the capable and enthusiastic rhythm section from Pansy Division. They are just about perfect, playing all their best songs in the manner you want to hear them played. The appearance of original member James Wilsey for the final two numbers brought gasps from some audience members, given the guitarist’s recent health issues, and he looked fragile but overjoyed as he joined in on “Money (That’s What I Want)” and “I Believe In Me.”

The Weirdos made one of their increasingly rare LA appearances to close out the night with a tight, energetic run through most of their best-known material. They’re down to a four piece now, John and Dix Denney with bassist Zander Schloss and drummer Jeff Feidl, and while the absence of second guitarist Cliff Roman was noticeable, they’re still a potent force on stage. An over-amped cover of Love’s “7 And 7 Is” fit perfectly into their equally classic originals like “Life Of Crime” and “Solitary Confinement”.

I hear some people talk a lot about the futility of punk rock nostalgia, wasn’t all that supposed to be an alternative to the old guard, get us out of listening to the Beatles and the Stones for the rest of our lives? Well, sure. So is it ironic that the people who participated in it are here nearly forty years later playing their old songs? I don’t think so. At the end of the day we are human beings, our hearts soar when we sing the old songs, ones that meant a lot to us back in the old days, and still do. It’s the most natural thing in the world.  It doesn’t matter what our taste in music is. Joy is an increasingly precious commodity in this world, we should take it while we can.