Bl'ast! fires up new tunes, blood-red 7-inch on the way

It's been 26 years since Mike Neider and Clifford Dinsmore -- wild-eyed architects of guitar riffage and vocal/lyrical hemorrhage, respectively -- stepped into the laboratory of their devious minds and strung together some new tunes for those who last gripped onto their seat handles on the band's manic ride.

Last week, Bl'ast! unleashed a stream of two new blood-pumpers, "For Those Who've Graced the Fire!" and "The Pulse," which will fittingly be pressed onto a blood-red Rise Records 7-inch slated for an Oct. 30 release.

As if new Bl'ast! music isn't enticing enough, why not invite friends Dave Grohl to pound drums and Chuck Dukowski to manhandle bass for the session?

With Bl'ast! bassist Nick Oliveri and skinsman Joey Castillo unavailable at the time since they were touring with other projects, Neider and Dinsmore were anxious to get something new recorded, hence the one-day session in May at Grohl's Studio 606 in Northridge, Calif.

"At that time, we were in the process of signing to Rise Records and kinda felt we had a deadline hanging over our heads," Dinsmore said. "We just wanted to do something, mostly just to answer the question of whether or not we could still write Bl'ast! songs 25, 30 years later. So it's really cool to let Dave and Chuck sit in."

Added Neider about when the dust had settled and the tracks were complete: "It was a trip because me and Dave and Chuck and Clifford finally have a finished product. Sitting in 606, push play and it sounded like Bl'ast! We're all pretty stoked. Basically I wrote 'For Those Who've Graced the Fire' with wanting to deliver classic Bl'ast! in mind for the introduction of the band back into now. And we delivered."

Dinsmore explained that the Grohl/Dukowski session came about during a whirlwind of riff sharing, phone calls and emails. Neider had a riff ready to go and sent it to Grohl and Dukowski, and both guys dug what they heard and wanted in. So, the Bl'ast! guitar-meister contacted Dinsmore, told him the epic news and asked if he could be at 606 the next week to record the single. While Dinsmore wrote lyrics at his home in Santa Cruz, Neider jammed down from his home in Newport Beach to teach Dukowski the song at his Venice abode. Who knows where the everywhere-man Grohl jetted in from, but he was raring to go once everyone convened at 606.

"It was a lot of pressure, but it was kind of a good exercise in what you can do under a lot of pressure," Dinsmore said. "With Dave willing to do that with his schedule... you can't just (say), 'Ah, that sounds fine, but let's give a little bit more time,' because it would never happen again, not happen for a year or just whenever he has the next available time. With him being available, that was the crucial moment to do it. Made it more fun... for everyone to just bust it out under pressure."

Neider was stoked beyond belief to see what was happening before his eyes at 606. Grohl and Dukowksi's musicianship was stunning.

"Like Dave said, he wanted to do what Bill (Torgerson) always did and capture him and honor him," Neider said. "But he also wants to do what he does and we wanna capture him with Bl'ast!, so he did a nice mix of that, which was a really cool thing.

"And then Chuck, you know, sounds like Chuck! Bad-ass. You look over and see those two guys playing... a total treat. Really fun."

Dinsmore laughs when he shares a Dukowski/Grohl exchange: "I remember Chuck, he was just like, 'Dave, Oh my god, I didn't realize you could play drums like that.' And he's like, 'Well, Chuck, I grew up learning to play drums to Black Flag records. C'mon.' It was cool, old friends, to have that kind of weird musical chemistry come about after all these years. We've been around each other's music forever, but we never really jammed together."

Next up for Bl'ast! is cranking out a full-length album, which they plan to record in September for a January 2016 Rise release. Neider and Dinsmore have already recorded another new track with Oliveri and Castillo for a forthcoming split single with EyeHateGod on Rise.

Neider's already got some songs in his arsenal for the new record and Oliveri's ready to unload a few, as well.

"We'll all sit there and let it evolve, tweak it up a little bit. Everyone's working really well together -- it's like this natural thing that just rolls," Neider said. "I wanna have our Bl'ast! character, of course. I wouldn't wanna sway from that ever, but I wanna make it more today. I wanna try to make it to where it's way better recording, tighter, more open and brutal."

Added Dinsmore: "I think this new record is gonna be like the best of all three records, kind of rolled into one. Looking back in retrospect, it seems like we have a lot more perspective of what we want in terms of how to present Bl'ast! as a whole."

With Oliveri and Castillo as its riveting rhythm section, Dinsmore feels the live Bl'ast! experience is "gnarlier than it's ever been." 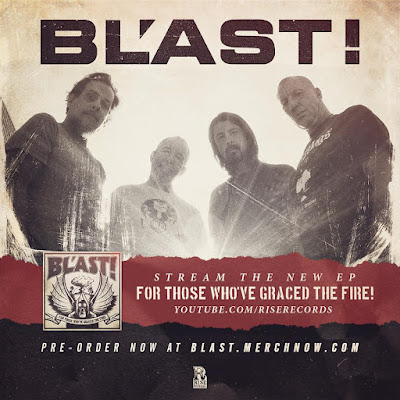