Raw Power: Can you feeeeel it? Arm, McCready, McKagan and Barrett -- Seattle's roof-rockers

That's what someone in the massive crowd was overheard saying prior to Sunday night's Raw Power: A Tribute to the Stooges free gig at Seattle's Pike Place Market.

According to sarcastic singer Mark Arm, they were the "fake Stooges" for the evening. And there was unfortunately no Iggy, but Arm noted that Pop was the man responsible for the 45-minute set -- which saw the band rock out on the roof of the iconic market. The event was presented by KEXP radio and the Pike Place Market Foundation. 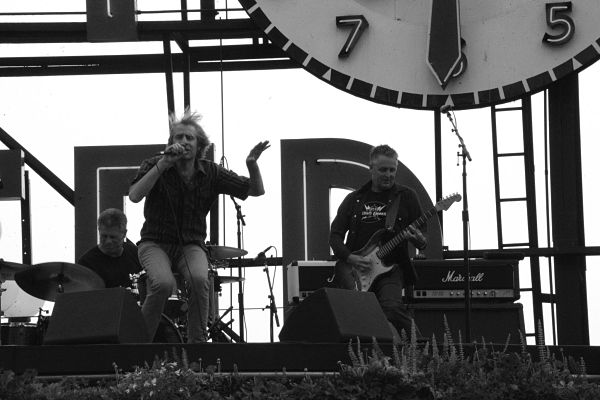 Along with Arm, Raw Power consisted of Mike McCready on guitar, Duff McKagan on bass and Barrett Martin on drums. All notable Seattle musicians from bands such as Mr. Epp and the Calculations, Shadow, the Fartz and Skin Yard. (As Mr. Arm quipped while introducing the band members... no need to mention the obvious bands here. Ha ha.)

Solid performances all around from the four men... and let's just say that Arm was in full Iggy mode, as always!

Little Doll (w/some 1969)
T.V. Eye
I Got A Right
I Need Somebody
Down on the Street
Search & Destroy
Loose