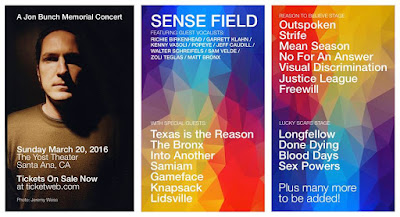 What you have here is a pair of reviews and photos from There's Something Hard in There friends who attended the Jon Bunch Memorial Concert on March 20 at The Yost Theater in Santa Ana, Calif.

It’s hard to believe Jon Bunch is no longer with us. When David Bowie died, it was difficult to comprehend, as well, but the difference is Jon was a punk rock kid from Los Angeles. He was a part of an actual community that we can call Southern California hardcore -- a tight knit scene of zines, labels and bands that often didn’t play anything resembling hardcore, but it doesn’t matter, because it is a community nonetheless. The difference is Jon was one of us.

I sort of knew Jon Bunch from seeing his band Sense Field over the years. He would also trade in CDs at Aron’s Records in Hollywood, where I worked. To say he was a nice guy would be a massive understatement. Bunch, standing 6’ 6”, radiated positive energy.

One time at a Knapsack show, someone in the audience taunted the band, telling them to “Play faster, pussies!” Bunch approached this creep as a friend, kindly telling him what he was doing wasn’t cool, and that this was their last show ever, so it was really important to let them play without conflict. It worked, and the creep shut his mouth for the remainder of the show. He had that kind of charismatic power about him.

The last time I saw Jon was in 2012. He was drunk. He was also SO happy to see me. I was just happy he remembered me at all. I have a feeling this is how he was with a lot of people. Jon embraced humanity. Judging by his temperament during his last interview ever (http://www.washedupemo.com/news/2016/8/ep-57-jon-bunch), he maintained that enthusiastic spirit until the very end.

I won’t get into the timeline of Jon’s bands. All that is Google-able. Here are the important points I’d like to make regarding his music:

* His first band Reason To Believe is the most underrated hardcore band ever. This has been my stock answer in this debate for the better part of the last two decades. They introduced a level of melody and complexity to the sub-genre without sacrificing one bit of the ferociousness and intensity that defines it. Why they remain obscure is beyond comprehension. Is it because their records are out of print? The first thing I would always ask Jon is, “When is that Reason To Believe discography coming out?” It’s a crime that he didn’t live to see it happen.

* He is technically the greatest singer in hardcore music of all time. In a scene that didn’t necessarily value vocal ability, Jon could really sing.

* It is a minor tragedy that Sense Field never “made it” commercially. They certainly had what I would consider mass appeal, although the cynical side of me would say they were too good for normal people to “get.” I know Jon would never think in these terms. His friend Richie Birkenhead of Into Another said on stage that Jon was never cynical. How many people can you say that about?

Immediately after the news broke that Jon Bunch died unexpectedly of a heart attack on Feb. 1, his friends Joe Nelson, Casey Jones and Chris Lisk (all former and current members of Orange County hardcore bands) assembled a day of remembrance in which 27 bands would play on three stages over the course of 7.5 hours on a single day. These are almost entirely bands that Jon was friends with and peers of, the lone exception being Scream –- a group that pre-dates Jon’s participation in music. Jon looked up to Scream and was even pen pals with frontman Pete Stahl. Jon’s bands had a reputation of not fitting into any one sound, and this event was reflective of that. The music was a total mishmash of traditional hardcore (No For An Answer), emo/indie (Texas is the Reason) and even ska (Aquabats).

Because set times overlapped, attendees were forced to make difficult choices. Walk out on Scream after five songs in order to catch the beginning of Into Another’s set, and then miss Outspoken altogether? Walk out on Rocket From The Crypt during their second song to catch the second half of A Chorus of Disapproval? I was at peace with this dilemma. The two alternatives would have been worse –- either drag it out over two days or deny Jon’s friends a chance to perform.

The entire event was a giant late ‘80s/’90s hardcore family reunion. Virtually everyone I remember seeing at shows 20 years ago was there, mostly looking a little older, a little balder and a little fatter, some with kids in tow. It was overwhelming. There was rarely a dull moment, and in that rare case, one could just watch a different band play or catch up on old times with people they normally never see anymore outside of Facebook. I barely found time to drink water or go to the bathroom for several hours. The overall vibe was absolutely festive. No one was sad. This was a celebration of Jon’s life.

There were a handful of highlights for me personally. One was seeing Ignite with all original members perform with their first two singers -- event organizer Joe Nelson and Randy Johnson. Having only seen them with their third vocalist Zoli Teglas, this was a real treat that I never thought I’d witness. Another was seeing Into Another perform their 1992 ballad “Without a Medium” –- a song they have only ever played live once or twice before. It is fittingly about a dead friend.

Without a doubt, the band that stole the show was the headliner. Sense Field performed with a revolving door of guest singers standing in for Jon Bunch. On paper, this seemed like a train wreck waiting to happen. How could ANYONE else do the songs justice? We’ve already established that Jon was the best hardcore singer ever. Richie Birkenhead went first, who is also an extraordinary singer. I figured it was all downhill from there, but I was very wrong. Zoli Teglas read lyrics off a piece of paper, but it didn’t matter, as his voice was probably closer to Jon’s than anybody else. Jon sang for Ignite once on a tour after Zoli had hurt his back, so here it was the other way around. Jonah Matranga of Far hyped up the crowd, even stagediving at one point while singing the title track off "Building," a high point in Sense Field’s discography. Much to my delight, Sense Field even performed two Reason To Believe songs with vocalists Jae Hansel (Outspoken, Blood Days) and Matt Caughthran (The Bronx). Several guest singers came out and sang “Found You” as an encore.

I found Joe Nelson after the whole thing was over and I told him, “I can’t wait for next year.” He laughed. As far as I’m concerned, March 20 is Jon Bunch Day. Turning this into an annual event would be a great way to celebrate Jon, and ensure that he’s never forgotten. There are so many more bands that could play at these future events (any number of Jon’s other bands, Shades Apart, Engine Kid, Insted, Justice League, who mysteriously dropped off this bill). The possibilities are enough to sustain many Jon Bunch Days to come.

Postscript: I often think about this photo my friend Josh Schwartz took at a Sense Field show we attended in either 1995 or 1996. Jon Bunch is pouring his heart out in this moment, as he always did. Josh was a terrific artist who dabbled in photography for a year or so, and then began suffering from mental illness while attending Cal Arts. I fell out of touch with him about a decade ago, and at this point I have no idea if he is even still alive. This is a HUGE long shot, but if anyone knows of his whereabouts, please get in touch with me.

Jon Bunch’s memorial was a swingin’ wake, but it got advertised as a concert.

I’m not gonna say it wasn’t a good time -- it was, but it was also a weird time. I suppose it was a healing thing. You forget that, when you don’t go to a memorial for a while, that it can be a nice place to reconnect with people that care about you, and meet people you haven’t met but you already have some sort of spiritual connection with.

It was also cool to see bands, some that I had seen a lot recently (Rocket From The Crypt -- there is NO better live band right now. Period. I’ll take your arguments), some that held up really well after not seeing them in twenty years (Knapsack!!!, and Samiam), some that I’d never seen that were as powerful as I’d ever imagined (Scream! Yes, the actual DC hardcore legends, Scream) and some that I’d never seen that were a good time for all of the families there (Aquabats). And then, y’know, all of the other bands, I mean, it’s really cool they came because they all meant a lot to Jon, and Jon meant a lot to them. 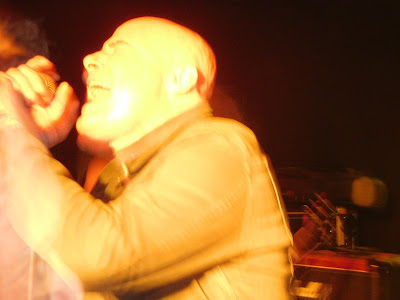 It kind of made me think, this is actually the best memorial I’ve ever been to, because it’s all these people that cared so much about this guy, they all paid to make sure his family would get a little bit of support, and everybody got to have that healing experience. I’m sure everybody there had a completely different concert experience than I did, because there were a zillion bands, and I am pretty sure almost nobody saw all of them.

The real highlights for me were a couple of the stories:

Pete from Scream saying Jon wrote them a letter and they were so stoked -- a letter came from California!

Speedo from Rocket From The Crypt talking about how Jon invited his then fledgling band, Pitchfork, to play their first shows outside of San Diego. How encouraging they were, how enthusiastic Jon was. Even though Rick and John from Pitchfork didn’t look cool because they didn’t have cool bleach blond hair and pukka shell necklaces and shorts, the guys in Reason To Believe (Bunch’s early band) still thought the Pitchfork guys were cool.

This is where it gets hard, and a tear wells up in my eye. I was definitely a fan of Sense Field. The first thing I heard from them was the record, “Building”, and I kept an eye out for them, got the one record that the rumor was the label squashed, got everything, got in touch with Jon, got to be his friend, got to see who our mutual friends were, and he even had me do some initial artwork for his band, Lucky Scars. He was always friendly, always approachable, and seemed to always genuinely WANT to be approached. He learned about you and liked things about you -- he was your fan right on back.

What a cool guy. I hope you know people like him because the world needs more of them. 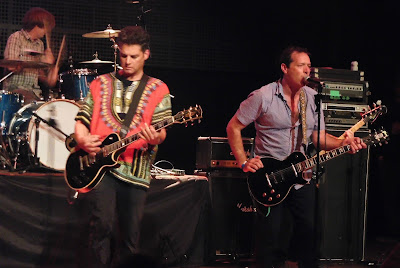