Trying to pin down the Replacements: good luck

OK, so this one won't be perfect.

After all, you notice who I'm attempting to write about, and you'll understand why: the Replacements.

How can you even put a finger on this rough-and-tumble, ragged, screwed-up and yet chaotically winsome and inspiring troupe of misfits, drunks and marauders?

You don't. You just speak from your soul and try and get as close to right as possible. (You may sort of succeed for a moment, but then you'll probably mess it up, veer off course and have to salvage what still remains and throw your torn and frayed hat into the ring again.)

That's the 'Mats for ya, and that's why Bob Mehr's "Trouble Boys: The True Story of the Replacements" is a book all fans should devour, even though you know you'll be glad, pissed, frustrated, angry and weepy along the way. We know what's coming, but we strap ourselves in for the long haul because we want to feel close to the band, even if we're pummeled by the emotions the 'Mats dealt with along their rocky road of life and death.

I'm not going into details here about the band's near rise, but always shortfall. Settle in, read the book and take the ride. There's so much within the 'Mats' walls and you'll break in with Mehr as much as he could (no sledgehammer necessary, it seems) -- which was farther than anyone else has ever done. But there's still more, there's always more that could be divulged, right? (It will never be complete, but that's also the allure of it... we can make our own assumptions, decipher things ourselves, in our own way... just like with Paul Westerberg's lyrics.)

It's real-life stuff. It helps you grow and learn from your mistakes. There are no answers, no correct way of doing things, but you give it a shot, try and pave a new course and ... keep trying.

I came late to the Replacements' swingin' party.

I knew who they were through fanzines and from a small mention here and there from Bob Mould when we hung out back in the early 1980s. It wasn't until "Let it Be" was released that I finally put my ears into their world via a tape of that album and "Hootenanny" from a movie-theater coworker. (He also made me an REM tape, which I find funny now since the two bands were rivals, but friends, as well.)

I wasn't completely sold on the 'Mats from the outset, however. I dug a bunch of the hard and soft songs on that tape ("Unsatisfied" was tops alongside "Favorite Thing"), but some of the tunes missed the mark for me. At that time, I was mainly locked into the more razor-edged fare from the Huskers and others, but I eventually came around to those 'Mats songs that didn't initially resonate with me. I gave them many chances... just like the 'Mats had in their career .

I followed the 'Mats throughout the rest of their twisting and turning existence (mostly twisted with alcohol, drugs and chaos on tap) and learned to appreciate nearly everything they offered fans. They might not have been reliable to management, producers and record executives, but they were always there when we needed them with some stellar tunes and brutally honest lyrics that were woven into our lives. (They weren't gospel or anything, but they sufficed when you cracked open a beer and pondered whatever situation you were in at the time. If you didn't nod your head, smile and utter an "a-ha" during bits of their songs, you weren't listening close enough, or maybe they weren't the band for you.)

I turned to these lyrics from "Achin' to Be" copious times during my final semester of college:

I saw them live three times: once at the Country Club in Reseda, CA (1987), another time at One Step Beyond in Santa Clara, CA (1989) and lastly at the Bumbershoot festival in Seattle (2014). I didn't know what to expect each time, and that's what made each show memorable... you got what you got -- mostly shenanigans, but some stunning moments, as well -- and you had to be content with the 'Mats even making it to the gig in the first place. There was always a big question mark swirling throughout their career, but at least they provided a few answers along the way to keep us somewhat satisfied.

And for the record, in true 'Mats' fashion, a few buddies and myself were drinking in the car prior to the Santa Clara gig and ran in halfway through the first song because we had to drain our beers. Better late than never. 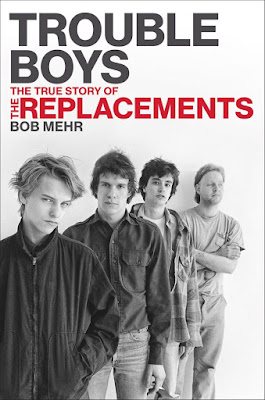 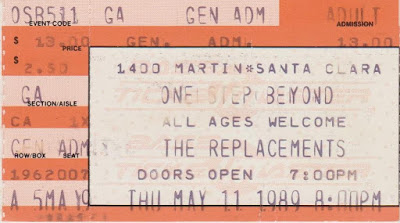