My Valentine to T.S.O.L. 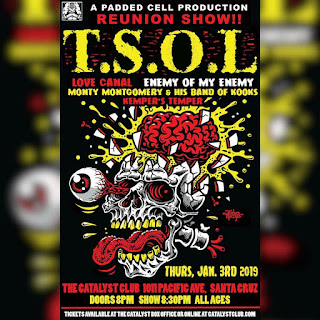 SO the True Sounds of Liberty…. where oh where do I start? In 1981, one of the best, most ruling, raging records to ever be released was that first EP (on the Posh Boy label), which gave birth to that first full length LP, 1981’s "Dance with Me."

From Huntington Beach, T.S.O.L. were formed by Jack Grisham (first in the excellent Vicious Circle), Todd Barnes (RIP) on drums, Mike Roche as the bass man, and Ron Emory on guitar. Greg Kuehn would join on keyboards in 1983. The death element was always present with our men from day one, totally magnified with 1983’s "Beneath the Shadows" that they had one foot in a stanky graveyard. Jack Grisham would have been nicking everything from this graveyard, just like how he stole cars back in the day and lit them on fire. The audience was like one of those cars. Picture it: a gas guzzler from the '70s, amiss of EPA standards, smoldering toxic fumes into the air with a missing stereo…Jack Grisham standing there with an evil smile, the demon. That’s what I felt like after the show. A crazy ride I totally enjoyed.

Even the old burnout dude next to me who kept yelling out “'Flowers by the Door,' man!!!!” and needed to be told, uh, dude, wrong singer, was moved. Jack and drummer Todd left the band in 1983, a year before "Change Today?" was recorded/released in 1984. Guess what? Jack’s ex brother in-law Joe Wood took over on vocals. That must’ve made for some awkwardness. But, I digress., T.S.O.L. with the three original members and drummer Antonio Val Hernandez, were outstanding, loud, funny, and tight as hell. They mixed it up, but mostly focused on early material, largely that EP which evolved into "Dance with Me," and they threw in some other gems.

My ride with T.S.O.L. started in 1989, when I was 12, and also the same year Jack Grisham got sober. I hated my life and was miserable, coming home from school and crying every day because I was picked on by asshole kids. My parents had split up earlier that year and my mom and I had to move into my grandparents' smoke-infested house.  The realization that I was a little freak who didn’t fit in with ANYBODY really hit me that year hardcore. At home, I was picked on, too, and couldn’t do anything right, which I was developing a serious attitude about. I missed my dad, even if he was drunk. Basically, I was sad, angry, and realized I had no future. If life was going to be like this, what’s the point.

Hearing that first T.S.O.L. EP and "Dance with Me" at friend’s house saved me. The opening bass line of "World War 3," having that pound my ears, which was excellent at the show by the way, what this article is really about, and of course "Abolish Government/Silent Majority," which was also the show’s closer. In their set, "In My Head" from 2001’s "Disappear" was also high point. Wow, "Sounds of Laughter" was terrific. When they played "Code Blue," which begins telling about all the girls who tried to enforce their morals and rules on a young Jack Grisham, it reminded me of how that song always made me think of what the stupid, sheep kids in junior high did to me, when I first heard it. I got the sarcasm right away about rather fucking the dead. I remember thinking there are people who write these songs who feel like I do, who see the world in the same nihilistic way. People who have also suffered at the hands and mouths of others and it changed who they are or were meant to be forever. The friend’s unscrupulous older brother lent me the first EP and "Dance with Me" on tape that day. I was hooked.

Within a year, I’d be turned on to the Damned, early Clash, the Ramones, the Pistols, Black Flag, the Circle Jerks, the Dead Kennedys, the Vandals, and the Germs. I remember picking up later T.S.O.L. records, some in the dollar bin at Tower, and being like, what happened to these guys? That aside, punk rock became EVERYTHING. Loving the more obscure stuff would follow, along with joining KFJC and doing radio shows. I started going to any punk show I could get to, trying to not be too much of a dork so that older kids (unsuccessfully) would drive me or I could sneak in, or there was an all-ages show, which were starting to happen at the time. I developed a love of beer, punk rock vinyl, and mosh pits. And punk guys. Oh, the punk rock guys. These are lifelong afflictions. I was doomed. Any movie that had to do with punk rock? Sucker! Any book or magazine even if it was a crappy source I’d realize later-done! I couldn’t absorb enough about punk rock, thanks to T.S.O.L. Still can’t. This rings true every time cool new punk rock records or reissues show up at KFJC that are discovered when I do a radio show.

As I was watching bodies fly over Jack’s head at the gig, I kind of reflected on all this that was shared above.  Damn, they are a good band. Those first three records were so solid. When Jack left the band, things changed, but they are back to true form and have been for years. Drummer Antonio Val Hernandez pounds, along with the original three members.Jack was hilarious, making fun of how politically correct everything is now and the elderly are the last group you can make fun of. He thanked the government for being the reason their mailman drummer could be with them touring and playing shows, and mentioned how Hernandez was Mike’s mailman looking in a window at his house one day and happened to see a T.S.O.L. poster on the wall. Jack raised the point about how a mailman looking in someone’s window is creepy. Mr. Grisham is still a total cut-up. He had a great bright red suit jacket with the demon embroidered on the back with T.S.O.L. 1981, who strongly resembled the "American Demon" character on the back cover of the book. (Grisham’s writing is also well worth checking out, by the way.)

Support by Love Canal was killer. They are an excellent, tight punk rock band also from Huntington Beach, with members who’ve been in D.I., Agent Orange, Youth Brigade, and the Vandals, to name a few. Those men have an impressive resume. They came out of the same scene essentially when formed in 1982 and are friends with the band.  Perfect choice to open for T.S.O.L. and get the crowd ready. They were terrific, noisy, fast, and have a lot of really excellent material to play. Wish they could’ve played longer, love those guys. When a band leaves you wanting more, it’s a good thing. Santa Cruz’s Enemy of My Enemy also helped set the tone for the night, ending their set with a great cover of The Gits' “Second Skin.”  Kemper’s Temper was full of Cookie Monster vocals death metal, who started the show for early arrivals, around 9ish. You know everyone was just getting trashed at the upstairs bar or hanging out in front of The Catalyst. They were waiting for the goods...and the band wasn’t too happy about it, telling the crowd to move more.

It was thrilling to hear “Superficial Love,” “Wash Away”, “Sounds of Laughter”, and “Property is Theft.”  The fact that they are playing those early albums and bringing back the early LA punk rock energy really demonstrates the power and relevance of T.S.O.L., and how they’ve remained a punk rock staple for so many, including me. A few times a week I still throw on "Dance with Me" because it has lived in my head for 30 years. I play a song from the first three LPs on just about every radio show I do. With everything they’ve been through, T.S.O.L. is still loud, tight, and makes the crowd go ballistic, with the LA punk rock circular mosh pit that allows bodies to become projectiles. T.S.O.L.’s pits are legendary. Glad I remembered to take my earrings off when I came out of the bathroom between bands, cause I’ve seen "Decline" more than once. Jack getting the shit beat out of him at Zubie’s by savage cowboys in the "Cuckoo’s Nest" movie also comes to mind. Dude has been through it and is as great a frontman as ever. His vocals and the lyrics were spot on. Big props to Mike Roche’s bass, Ron Emory’s guitar, and Antonio Val Hernandez’s drumming. Greg Kuehn couldn’t make it for piano…which has been a key part of T.S.O.L.’s sound since "Dance with Me."  He’s back with them though for the SoCal shows coming up this week.

So my parting words here are go see T.S.O.L.! If for any millisecond you doubted why punk rock mattered, in which case you need an ass-beating, or thought you’d heard these songs way too many times, you will be proven wrong.

Reject Girl has been a DJ at KFJC 89.7 fm in Los Altos Hills, CA since 1996. She still loves punk rock vinyl, beer, and going to punk shows she doesn't have to sneak into anymore. T.S.O.L. rules, by the way.