CH3 knock out 'The Bellwether' for Record Store Day 2019 release

Welcome back, CH3. The following is a press release from Hostage Records:

CH3, those stalwart survivors of the early 1980s SoCal punk scene, return with a surprise new five-song EP, "The Bellwether." The 12" 45 RPM colored vinyl from Hostage Records will hit stores on Record Store Day 2019 -- April 13. Digital and CD are also available at all the usual sources.

The collection of songs showcases the band at the peak of their game, some 38 years after their debut EP on the legendary Posh Boy label. Hostage Records has packaged the record as an homage to that first release, with tribute label artwork mirroring the Posh Boy flag.

"The Bellwether" is a tight bright collection of four new songs that showcase the group's melodic punk craft, as well as a cover of The Plimsouls' "How Long Will it Take."

The first track up, "What You Need," is a 100-second hardcore blaster, echoing back to the eponymous 1981 EP's "Mannequin."

The EP is available on red vinyl as well as collectors editions in unique color swirls. The sleeve artwork features Toronto artist Rob Elliott's torch monkey leaving a burning bridge in his wake, a theme that is echoed in the EP's title track. 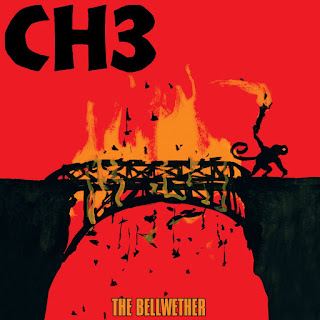 This record also feature's CH3's first instrumental track, "Mendiolas 1983." Those familiar with the L.A. hardcore days of the 1980s will recognize this call out to the infamous Exploited/CH3/Youth Brigade riot at the ballroom of the same name.

"Blackballed," the power punk pop single that kicks off side B, is a reminder of CH3's ease of bridging the muscle of hardcore with the timeless melody of power pop. The video for the song (with the Spinal Tap tribute intro!) was filmed at Long Beach record store Third Eye Records.

The album closer is a fitting tribute to Los Angeles' beloved The Plimsouls, whose raucous live shows influenced the lads in CH3 back in the glory days of the 1980s SoCal club scene.