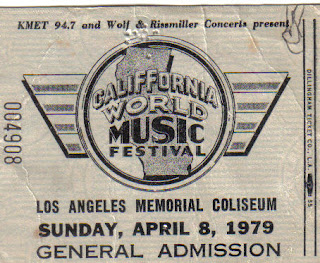 Since today is the 40th anniversary of this epic concert, the following is a repost from Jan. 26, 2011. On the UFO front, we've got a crew that will be rocking with the boys this October in Las Vegas.

* My dad having to return to the car to put back his pocket knife, which didn't make it past security. While he was away, I waited by the front gate and saw several guards pin down a screaming, shirtless, long-haired man who appeared to be strung out on drugs.

On a current note, a friend of ours recently left his pocket knife in our car during a Neurosis/Black Breath gig. We safely returned it to him the following day. Talk about coming full circle.
Posted by Andy and Cat Rose at 10:11 AM