Free Doom For the Masses

Doom Fest:  Our friend Nickle's brilliant idea that came to fruition on August 1, 2010 at Magnuson Park, Seattle, WA. Here is Nickle (above) before the action as we and many others were helping him set up. The calm before the storm.

DoomSower:  enough said --just two guys (at that time) and a whole lot of noise.  From Portland, OR, they kicked ass. Favorite part: notice the sword microphone stand.

Roareth:  from Edmonds, WA they said, who'da thunk it? Edmonds being a pretty sleepy town, would never have guessed that's where they were from. Had not heard of them before this, but they turned out to be one of our favorite bands of the day.

Fuck Knuckles:  Russell Brand look-alike on acid (not that that is a stretch). Solo artiste from Birmingham, England. Nickle's little British import for the day. He basically plays feedback which, some may think is genius, some others may wonder "why?" Best part: our friend Diana Mivelli asked when he was going to start playing when we realized that he apparently already had.

Brothers of the Sonic Cloth:  Hell ya! Tad Doyle at his best with his wife Peg Doyle on bass, catch them if you get 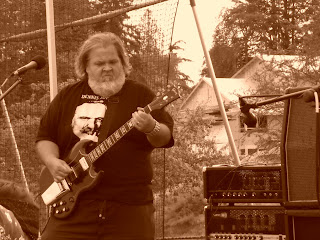 
Witchburn:  Jamie (Nova) rocked the crowd as the lead singer for the headliner. She also hails from Hell's Belles (Seattle all-female AC/DC cover band). An awesome ending to a delightful doom day.

Nickle hopes to have another one coming up again this year and we hope so too!  We will be helping him however we can and he is also looking for bands and anyone else that can help. Cheers to Nick for putting this all together!
Posted by Andy and Cat Rose at 10:48 PM