Hanging with Henry, the Huskers and the SST Records crew in Redondo Beach 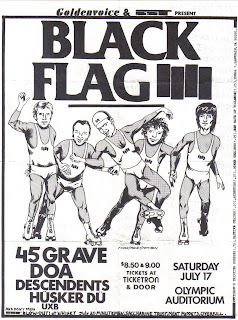 By Ed and Andy

When 20-year-old, muscled and shaved-head Henry Rollins hit Los Angeles with Black Flag in 1981, we soon found ourselves befriending and hanging out with the razor-blade-throated vocalist and the SST Records crew.

Here's how it all went down:

Ed: We were at the Hollywood Palladium for that Youth Movement '82 show on Feb. 11 with TSOL headlining and Social D, Wasted Youth, Adolescents and a couple other bands. That was the show when some dude dove (or did he fall?-- Andy) off the balcony -- the next one-upmanship from diving off the speakers at Godzilla's because a stage dive just wasn't cutting it anymore.

There were rumors of a new singer for Flag named Henry, and Andy and I were pretty sure that meant Henry from Washington, DC -- the most rad frontman for SOA -- and only a few SoCals knew of the DC scene at the time. Luckily, Andy and I had "discovered" the DC scene, so when I spotted that fit bald guy in the shadows by himself taking everything in -- even a little intimidated -- I knew I should say something. As I approached (something I couldn't do with a young Suzanna Hoffs...), I noticed his Vans right away and knew he'd be cool. I led with -- "Hey, aren't you Henry from DC/SOA -- the new singer for Black Flag?" His intense, defensive scowl
slowly changed and we began to chat. I was throwing around band names such as Teen Idles, Gov't Issue, Youth Brigade and, of course, Minor Threat and he realized I knew more than your average shaved head, flannel- and jeans-wearing beach punk. He told me how he got recruited and couldn't stop talking about the Bad Brains and Trouble Funk.

He told me about SST and that it was in North Redondo Beach on Phelan Avenue. Strange coincidence -- we lived in North Redondo on Steinhart Avenue. He told us to swing by, and that was all we needed to know. I think we went there the next day and began the Black Flag experience. I believe Dave-O (Clausen) was the guy we eventually really hung out with and who would get us on the lists. Of course, Andy took that in to a new level. I knew this was something cool -- Andy knew there was much more...

First time we visited the Phelan office, Henry played us SOA, Teen Idles and Faith demos and some killer Bad Brains live tapes. He dug into his boxes and gave us some DC fliers, one of which had a personal note from Ian Mackaye to him on the back (pictured). When the DC compilation "Flex Your Head" came out later, I borrowed it from Henry to tape it at home ... I guess I held onto it too long and he chewed me out over the phone -- "Get that to me ASAP, I'm making some DC tapes for a friend of mine" -- I did, and I've been prompt in returning things I've borrowed from friends from that day on.

Those early Phelan days opened the doors for us in hanging out with the folks in Flag, Minutemen, Saccharine Trust and Husker Du. When Bob Mould visited my house to play records and shoot some basketball on our backyard court, my mom jokingly asked him, "Which one are you -- Husker or Du?"

My parents never met Henry ... if they did, it would have been a very interesting moment. Carrie sold Henry a greeting card when she was working at Guild Drugs on Artesia Boulevard in Manhattan Beach ... the stories go on and on.
Posted by Andy and Cat Rose at 4:35 PM