Mike Ness and Social Distortion: Past and present -- good and bad

A mysterious man -- ghoulish face, all dressed in black -- appeared from behind the blood-red curtains and grabbed me by the shirt.

I skittered past a crowd of punks and the woman working the backstage table, nearly falling into a pole, and found myself on "the other side." It all happened so quickly. I wasn't sure where I'd end up, but I knew I was heading somewhere exciting. A place that would turn my 14-year-old normal existence into a raucous, but also enlightening, world of screaming singers, magical guitarists and hard-drinking, hardcore music cravers.
"Count me in," I seemed to say under my breath.

"Hey, man, I got you in ... you're all set," the black-clad man said to me in a hoarse voice, one obviously soaked in beer and stained with tobacco.

"Thanks, who are you?" I shyly asked, smoothing out my black gym shirt emblazoned with a gold anarchy "A" that I'd spraypainted on there earlier in the day.

"I'm Mike, I sing for a band called Social Distortion," he lobbed back, staring at me with piercing eyes blotted with black makeup.

I'd never heard of the band, but I had a gut feeling that I'd dig them. I was at the Santa Monica Civic Auditorium that night in the summer of 1981 to check out Black Flag, Adolescents, DOA and the Minutemen -- and I knew that if Mike was there, trolling the backstage area, that he was musically on my side.
"Cool, do you have any records out? When are you playing next?" I said, wanting to know everything about my new favorite band.

Mike gave me a quick lowdown on Social D, and then he headed off to find his buddies.

A few weeks later, I heard the strains of a song called "Mainliner" ooze out of my radio on Rodney Bingenheimer's show on KROQ 106.7. What the hell? The Clash- and Johnny Thunders' Heartbreakers-inspired tune was a bit rough, but it was amazing nonetheless -- and there was that voice. Sure enough, Rodney announced that it was Social Distortion. Just perfect, I thought.

I soon picked up the "Mainliner/Playpen" single at Recycled Records in Hermosa Beach, and later was floored by the band's "1945" on Rodney's compilation record.

Over the next year and a half or so, I saw the band (as both a three- and four-piece) around the Los Angeles area at spots like the Whisky, Hollywood Palladium, Florentine Gardens, Lazarro's Ballroom and the Cuckoo's Nest in Costa Mesa. All stellar gigs, as was the band's debut album, "Mommy's Little Monster." 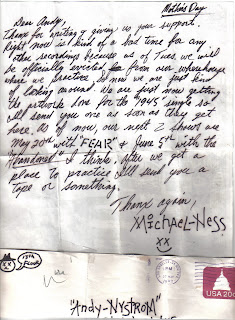 I spoke with Ness a few times during that time period, and he was always a cool guy. As the years wore on, though, the band went through some rough patches and apparently Ness even served some jail time for drug problems, which inspired the "Prison Bound" record. It was way toned down from the heavy-hitting "Monster," but still had some decent tunes.

Subsequent SD records were a mixed bag of roaring songs and country-tinged ones -- sometimes the song structures and lyrics were generic, sometimes spot-on. Perhaps if Ness still had early bandmates like Dennis Dannell (brain-aneurysm death) and Brent Liles (cycling-accident death) with him, the songs would be solid all around.

But Ness has grown considerably since those early years and has kept his guitar riffs and gravely voice intact, and this brings me to SD's new record, "Hard Times and Nursery Rhymes," released Jan. 18.

At first listen, Carrie noted that only two songs captured her ears, the single, "Machine Gun Blues," and the Hank Williams cover, "Alone and Forsaken." A few others are decent, as well, but it seems like SD has taken its punk-rock torch back after the band passed it on to Green Day -- not a bad move, but the tunes still scream generic.

However, "California (Hustle and Flow)" is just plain bad, and Carrie said with a smirk: "Sounds like Mike Ness has been hanging out with Bret Michaels, and the 'booty-shaking' Tina Turner backup vocals are lame.'"