Look back and laugh: A three-day journey with Minor Threat in the summer of 1982

With singer/guitarist Ian Mackaye at the helm, Fugazi rose from the ashes of Minor Threat, Embrace and Rites of Spring in Washington, D.C. Guitarist Brian Baker grew out his Minor Threat and Dag Nasty

bleached-blonde hair even longer to team up with former Big Boys and Decry guys in Hollywood's whiskey-rock outfit Junkyard.

It all began with, "Hey, you, with the Minor Threat sticker on your flannel."
I turned around to find a sweaty Battalion of Saints guitarist Chris Smith looking me in the eyes as he packed away his gear after a raucous set at Bob's Place in Los Angeles, June 11, 1982.

"We're playing with them July 9 in San Diego," Smith added.

I tucked that date away in my mind -- I simply had to go. But how?
At age 15, I didn't drive -- and if I arranged the trip with someone who did -- I would have to come up with one brilliant, convincing story to get my parents on board with my quest to see my two favorite bands.

Eventually, my friend Mike Paul became the driver man -- with his bitchin' Camaro -- and I informed my parents that I would be sleeping over at his house in Torrance that Friday evening. I did, but we also managed to make it to San Diego, locate the gig space and see Minor Threat, the BATS and Husker Du (!), before trucking it back to Paul's home and getting some well-deserved punk-rock rest.

We pulled it off -- and that began a memorable trifecta of Minor Threat gigs, which also included a near riot at HJ's in San Fernando Valley and a wild, sing-along, dog-pile-on-top-of-Mackaye show at Dancing Waters in San Pedro.

SAN DIEGO: JULY 9
"What's your names? Merrill (Ward) said we've got to put you on the guest list," Mackaye asked us while pointing at Ward, whom I knew from hanging around SST Records' office, which was a quick skateboard ride away from my Redondo Beach home.

Not bad, we thought, but it would get even better.

A while later, as we were sitting in front of the club, a gregarious man stumbled by and sang a Beatles song a cappela in a raspy yet melodic tone. We later recognized him as Grant Hart behind the Huskers' drum kit. 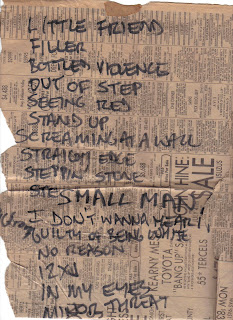 In short (as I noted in my Flipside #34 review back then), openers Men of Clay's keyboard/guitar punk fusion was enjoyable, the Huskers ripped through their ultracore set and blew us away, the BATS turned up the punk/metal to headbanging volume -- and Minor Threat, well, the crowd ate up every second of their in-your-face, hardcore bursts of energy.

After Minor Threat's set, Mackaye was spent and, with head down, trudged out of the club and into the night.

One gig down, two to go.

SAN FERNANDO VALLEY: July 10
I've got my brother and dad to thank for this one, no doubt.

With DOA's "Hardcore '81" blasting on the cassette player, my brother Eddie drove our Gremlin up the freeway toward HJ's. However, the car suffered a flat tire about a half hour into our journey, and we were stuck on the side of the road -- majorly bummed, of course. After calling my dad, he soon arrived in family vehicle No. 2, a VW bus, that saved the day. Thankfully, dad was into the switch-off, and as he waited for Gremlin help, we took off in the bus toward the valley.

After arriving at HJ's, a country bar complete with sawdust on the floor, we were confused as to whether they were going all-ages on that night or 21-over. I do remember seeing Susannah Hoffs of the then Bangs there and some guy with a homemade "Miner Threat" shirt (yes, Miner, ha ha).

While everything was being sorted out, Eddie and I had a lengthy conversation with Lyle Preslar and Baker of Minor Threat about school, punk scenes and various other topics. Nice guys.

And that's when the first bottle was thrown by a punk at the HJ's building. Apparently, the club owners were canceling the show and some folks were downright pissed off.

In mid-chat with the Minor Threat boys, Mackaye came over and spoke of an alternate venue -- nearby Stone Fox Studios -- and they bolted for their van to get the hell out of there before the cops arrived. We followed in our bus and tore through the night and wound up at Stone Fox, a spot secured by the Youth Brigade guys.

With about 20 folks on hand, both bands played, with Minor Threat blasting through their set at breakneck pace, never tiring and giving us lucky ones a show for the ages.

SAN PEDRO: July 11
Next morning, word was out about another Minor Threat gig at Dancing Waters in San Pedro.

Camaro Mike was back for this one, and Manhattan Beach punk characters with names like Chriso, Hank, Fletcher (Pennywise) and Dougie (Dag Nasty, Descendents) also made appearances.

Upon arrival, I noticed the Minor Threat van, and Baker emerged from it, gave me a nod and a smirk and headed into the club. 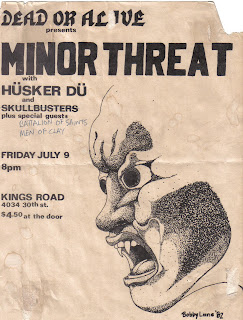 Black Flag played a short set that night, and Henry Rollins was in full force during Minor Threat's set, as well, piling onto the stage with the rest of us to share vocal duties with Mackaye, who was more than willing to hand off the mic.

It was another killer show, and probably the best of the three in a row (and certainly more intimate than the massive July 3 gig at The Barn at Alpine Village, where you could barely see the band on the stage because of the constant stream of divers and slammers. Mackaye's bald head popped up every once in a while, so you knew he was there).

Bumps, bruises and hoarse voices aside for all involved, the ride home after Dancing Waters was bliss, knowing that we were witness to something special that night.

Thanks to the Manhattan crew, they brought a cassette tape and had the sound guy record the gig, which I still have a copy of today and still play often. It still sounds as loud, clear, angry and vital as it did then.

I drove by the area where Dancing Waters stood recently with my wife and parents, and I remember smiling as I looked over at the spot, still hearing those songs echo in my mind.

(This story ran recently on the Double Cross and Sparkplug Magazine Web sites.)
Posted by Andy and Cat Rose at 10:34 PM