Another 25-center: Doughboys a welcome addition to bag o' tapes

So, we already had the Doughboys' fantastic "Crush" on CD and played the hell out of that thing when it came out in 1993. But two weeks ago, I dropped a quarter on a cassette copy at Half Price Books in Seattle and relived that classic tuneage in my car (yes, we still have a car with a tape deck). "Crush" is necessary listening as far as I'm concerned.

Sporting dreadlocks and Les Pauls, those Canadians could jump higher than any punkers around (and those guitars are heavy!), possibly even putting Michael Jordan back into his kindergarten seat. The tunes are heavy and poppy all at once -- the perfect mixture to satisfy the Descendents and Big Drill Car crowd. 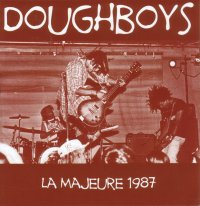 Saw them live four times at Gilman Street in Berkeley and the Edge in Palo Alto alongside NoFX, 7 Seconds, the Buzzcocks and Redd Kross. The Doughs were simply a powerhouse unit live, and that blast from the past "Crush" made my drive a smooth one and got me thinking about the initial Gilman gig in 1989. Since I had bailed out on my friends Sean and Joe the week before as driver to see Sepultura in Oakland (sorry guys, but the San Jose State University Spartan Pub was calling), I had to get back in their good graces and hit up the Doughs gig. Joe skipped out this time, but Sean and I reveled in the sounds of the band that evening.

Where does this take us today? Well, it's all about the bag o' tapes. As shown in the above photo, you've got everything from the Yardbirds to Los Lobos to the "Return of the Living Dead" soundtrack. I've purchased these titles and many more over the last five years or so at thrift stores, record stores, pawn shops and garage sales -- all for a quarter or so. It's an addiction, man.

Some of the tapes have sucked (I've tossed them, and I won't name them to protect my alleged good taste), but there's nothing like popping in a used, sometimes-hissing cassette and letting the music bring you back to when tapes ruled the day. You remember friends, places, the hippie behind the counter who sold you the tape or the geek who wanted the tape but you grabbed it first.

Alongside the illustrious bag o' tapes, we've still got hundreds of cassettes dating back to the early '80s. Punk, metal, pop, it's all there and ready to get some tape-deck action. There's store-bought tapes and treasured mix tapes -- for the latter, I went with the baseball approach: a solid leadoff song, building to the hard-hitting cleanup fourth spot ... and you go from there.