Tall boys of Budweiser in the parking lot: check.
Minutemen shredding their punk/funk to a mostly unappreciative crowd (I and many others dug them, though): check. 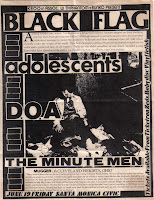 DOA killing it and bassist Randy Rampage chucking his bass against the back wall either out of excitement or because the thing broke: check.
Pat Smear of the Germs joining the Ads on second guitar and helping them blast through "Amoeba" and all the other classics: check.
And, finally, watching Flag from side stage and seeing Chuck Dukowski working his bass to the hilt in that he slipped on the stage, and singer Dez Cadena barking out lyrics and throwing a mike stand into the crowd: check, check, check! Awesome gig. 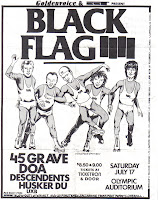 Most people who see this flier framed in our house always ask if this lineup was too good to be true. Agreed upon. The only thing I can say about this one is that every band was on fire and it all went by in such a blur that I wished I could have stopped time and revisited this one. A classic.

Highlights of this jaunt to the airplane hangar in Northridge:
Someone heckling singer Rudy from the Stains, who jumped in the crowd and got in a brawl with the yelling dude. 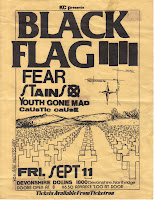 Watching Henry wrap the microphone cord around his neck like a hangman's noose during the long, droning, wonderful "Damaged I."

Notice that Husker Du is still near the bottom of the bill here with the Descendents just above. You know where both these bands would soon be headed. Anyways, my brother, Ed, and I got in the van with the Huskers for this one and were treated to a killer Black Flag soundcheck to kick off the evening. St. Vitus brought out the inner metalhead in me, the Huskers leveled the small gathering crowd, the Descendents blazed with their two-guitar attack and Milo's energetic performance, Redd Kross rocked and rolled, and who could forget Henry wearing short shorts and revving up the crowd with "Rise Above" and many others? A wild one.

DOA and the Descendents again with the mighty Flag. Ray Cooper sang for the 'Dents on this evening and did a fine job filling Milo's shoes. During Flag's set, Henry got up close and personal with a fella in front and lunged at the guy with teeth bared and went for his nose. The folks in the slam pit blasted into the area at that moment, so I never saw the conclusion of that meeting. Intense.

This one is mine (Carrie): After seeing Henry flip sweat off his then long locks and seeing the Ramones rock out (like only the Ramones could), my friend and I came out of the Palladium to a row of riot-geared-up cops blocking the street and helicopters circling.  They apparently had it in their heads that there was going to be trouble when, of course, they were the ones that caused all the ruckus.  We high tailed it out of there when we saw the police beating someone with batons and someone else taking photos, they then turned to the photographer and started whacking. I had heard an interview with Joey Ramone years later and he said that this was one of his most memorable shows -- it was definitely so for me.

*Final note: We've given away some doubles of these fliers in our collection to various folks (including Tony Pence from Deep Sleep, who framed and hung some in his Celebrated Summer record store in Maryland), but we're keeping everything from here on out. Enjoy this blast from the past.
Posted by Andy and Cat Rose at 11:12 PM