And the Swedes will rock...Asta Kask at the Morgue (now Club M)

A great way to kick off our vacation hangin' at Club M (a clubhouse in historic Georgetown in Seattle) to check out a band from Andy's heritage -- Töreboda, Sweden's punks Asta Kask.

Snuggle -- who reminds us of a very early Samiam -- and two other mystery bands (apparently not the ones on the poster) opened for the Scandinavian gentlemen, who first started playing together in 1978 under the name X-tas (then changed the name in 1980). We actually did not know much about them until we downloaded some of their tunes about a decade back, but could not pass up a chance to check them out.
﻿﻿ ﻿﻿
﻿﻿﻿﻿ ﻿﻿﻿﻿ The Morgue is an all-ages club and there were definitely all ages there, from pre-teens to punk seniors.  In fact, it was pretty funny when a guy sporting a jacket with a large Battalion of Saints logo on it joked (after the singer of one opening band spouted off something in the vein of being nothing but a number with no voice to be heard in today's world)..."said the 20 year old".  I started laughing and then Battalion boy quipped "did I say that out loud?"...LOUD AND CLEAR.

Then Asta Kask (which translates in English to something about a "helmet"?) took the stage and brought us to their homeland...showed us how the Swedish roll and had the crowd slamming about. Unfortunately, some wanna-be Suicidal Tendencies numbskulls got out of control in the pit and had to be booted from the gig. (We saw that coming when they were swigging from their 40s of Olde E. outside, pre-gig.)

But Asta Kask held it together and completed their set with gusto. Glad they came to our city to launch their first-ever U.S. tour -- may the rest of their stay be filled with joy. 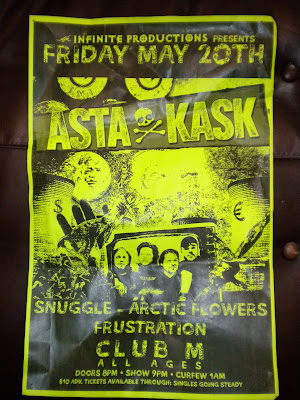