Sorex: the trials and tribulations of a young punk band from Redondo Beach, CA


There was no "Rock 'n Roll Swindle." No one ever had "the feeling (they'd) been cheated."

The Sex Pistols we weren't.﻿


If there was ever a punk quote about my old band Sorex, it would probably be from FEAR's Philo Cramer in the "Decline of Western Civilization": "Won't you be our friends?" As in give us a gig, a chance to slay a crowd -- believe me, this was hard to achieve for a no-name band from Redondo Beach, Calif., in 1984-'85. In fact, gigs were scarce then for LA punk bands who weren't deemed cool enough by the Goldenvoice promoters who ran the majority of the shows.

We just didn't fit in: we were punk, but kind of rock; we liked metal, but also embraced power-pop. We were a mixed bag of musical styles; even if we wore bags over our heads, no one would have noticed us.

If we would have made it into the '90s, we might have had our day in the sun when "punk broke" and more bands got in on the action. In our hometown South Bay area when Sorex existed, there were no places to play, except for the odd teen-center show, house parties or even a community-college campus. Nowadays, Suzy's Bar & Grill in Hermosa Beach, near my parents' house, has regular gigs -- we miss out again.

But we did have some highlights, my friends! We debuted at the infamous Cathay De Grande in Hollywood alongside pals The Detonators and Johnny and the Dingbats (Carrie was in attendance, by the way); hit the road to Ruthie's Inn in Berkeley and played with Broken Bones (ex-Discharge) and Special Forces; and traveled further to Sparks, Nev. (near Reno) to gig with the Circle Jerks and Seven Seconds. The Sparks gig took place in a former church with the bands playing on the “altar” … Sorex ("rat" in Latin) opened the show and blessed the crowd with its jarring Adolescents-meets-Germs aural attack to an appreciative (!) crowd.

We were a cast of characters: me ("Strom") on vocals, Dave Benson on drums, John Dieter ("JD") on bass and guitarists (at different times) Jerry Urczek, John Hacker and Tom Cornejo.

We forged our way into the world of punk music in the summer of 1984 in Benson’s Redondo garage and hammered out a ball of noise at first, but we'd end up penning some pretty decent songs along the way.

We first recorded a 10-song demo tape in a friend's home studio in Redondo and later released our only vinyl offering, the three-song "Portrait of a Prisoner" EP. Only 200 of the records were pressed, and in the year 2000, I received word that someone in the Portland, Ore., area paid $50 for a copy. 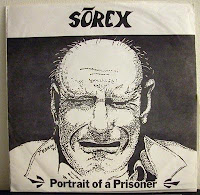 In the last three years, collectors have paid $68, $69, $82 and a whopping $103 on eBay for this "gem." I paid for most of the EP's recording and pressing costs with my movie-theater-job earnings, and haven't benefitted from the recent upswing in Sorex interest. I have owned just one copy of the EP for the last 26 years. I definitely could never be heard saying what Lee Ving of FEAR told the crowd in the "Decline": "This is our smash hit single from whence (I) got all the money."

As an added bonus, the EP's lead-off song, “Tell Me the Rules,” is included on the prestigious Hyped 2 Death #2 compilation, which was repressed in 2004. (Another bonus with "Tell Me the Rules" is that, like all good bands (ha ha), the lyrics were misinterpreted: this one was thought to be about one of my personal relationships. It's actually about a movie-theater friend who couldn't get his girl to commit to him.) 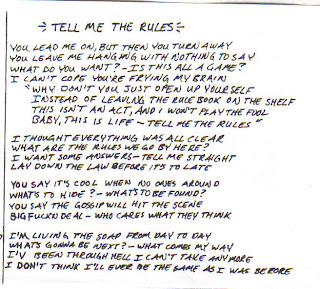 "So what happened to Sorex?" you might ask. (Or not, but you'll hear about it anyway.)

Well, some band members often clashed over lyrics and musical arrangements, I was told that I wasn't a good singer (most punk vocalists weren't exactly songbirds, but it worked for them. It's the energy and spirit that counts, right?) and some people just wanted out. The others weren't exactly masters of their musical crafts, either, so maybe the band dynamic as a whole just wasn't on track.

However, I feel if we had only stuck it out a little longer, things might have fallen into place for us ... we were writing better songs and making more contacts to set up gigs.

Our time was brief -- about a year and a half -- and I took away a valuable lesson from those days: I'm probably meant to be a music fan and not a band member. Tensions ran high back then in the practice room and wherever else we roamed, and for a 17/18-year-old, it was hard to handle (especially with college and work in the mix). Hell, at my age now, I probably couldn't deal with it.

For all you musicians out there -- if you can find, or have found, a solid group of players to spend your time with, the more power to you. Rock on, and I'll live vicariously through your musical journeys. 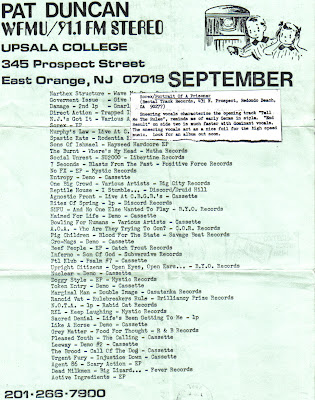