By Andy
﻿﻿﻿
﻿ ﻿﻿
Last October, Andy and Cat ventured to Australia to visit sister Kris and brother-in-law Rob ... and rock out, of course. Here's a bit of what happened (in no particular order):

With an atmosphere usually reserved for those of upper-tier, rock-star status, the Dunedin, NZ, noise-pop trio certainly didn't act the part as they attacked the song either doing the shoe-gaze thing or eyes-closed screamo bit -- and the packed, pogoing crowd was right with them from the start and throughout the hour-long set.

The set featured swinging four- and six-stringed instruments, falling microphone stands and Wilson jumping into the crowd with mic in hand, singing his way through the mob and standing on the bar (maybe knocking over a drink or two) to finish off one song.

DDD's latest record "Form" on Flying Nun Records continues in the Dunedin indie-pop tradition -- albeit a bit on the louder side -- alongside The Clean, The Bats, The Chills, Bailterspace and many more.

Sydney's Chicks Who Love Guns also played that evening and kicked it into high gear with songs like "Smash Fuck," "Vomit on the Dance Floor" and "Murder's Party."

Check them out, if you dare, at: http://www.myspace.com/chickswholoveguns

* After arriving in Sydney following about 16 hours worth of travel on our big bird in the sky, we were beat. But, thankfully, Kris and Rob were up for taking us to the 126-year-old Sandringham Hotel in Newtown to check out Klondike's North 40, featuring guitarist/vocalist Chris Masuak of Radio Birdman fame.

Masuak's trio blasted out power pop, garage rock and some blues during its first hour-long set before we headed back to our hosts' pad for some much-needed rest.

The Sando is an iconic Sydney music spot and we dug soaking up the atmosphere and being part of another solid night of tunes. (Later in the trip, in Melbourne, we hung out at the Esplanade Hotel -- The Espy -- another legendary rock venue, which has been open since 1878.)

Check out some Klondike tuneage at: http://www.myspace.com/klondike39snorthforty
"The Straight Path" record is chock full of great songs like "Sounds of Wailing," "Stupid Planet," "Recipe for Disaster" and more.

* Another highlight of our Sydney stay was watching Rob wail on his guitar along with his Chucks with Ducks bandmates at the Troy Horse (Alexandria), a jack-of-all-trades spot that features rehearsal rooms, a record shop and disc-duplication and graphic-design services, etc. (They've also got a cool collection of colorful gig posters on the stairway ... I snagged a Celibate Rifles one.)
Drummer Scott doubled as vocalist and gave a stellar treatment to an assortment of cover songs, ranging from Stiff Little Fingers to the Dead Kennedys to Motley Crue to Judas Priest. Cat and Andy sang the choruses to "Let's Lynch the Landlord" and "Breakin' the Law" ... so we're stars in Sydney now.


* When in Melbourne, hit up AC/DC Lane, for sure.

Cruise up Flinders Lane and you'll find the short, narrow laneway that runs between Exhibition and Russell streets. The Melbourne City Council unanimously voted to rename the street on Oct. 1, 2004, proving that everyone loves to rock -- with either Bon or Brian on the mic. 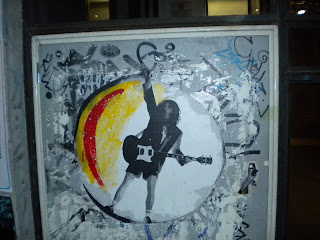 There wasn't much going on when we first visited ... it was practically empty, minus anyone bowing down or raising a pint to a statue of Angus or anything. There's plenty of AC/DC artwork on the walls along the walkway, so it's kind of cool. 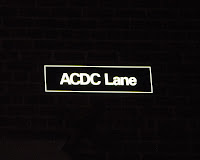 Later one night, we stepped into the Cherry Bar (owned by one of the Cosmic Psychos dudes) and checked out a -- what else? -- AC/DC-sounding, glam-looking band. It reeked of obviousness, but we were there, and that's what counts.
Posted by Andy and Cat Rose at 11:36 PM