For Black Breath vocalist Neil McAdams, the head-banging halted for just a bit after he took a digger and smashed his head into the ground during a slam-pit frenzy at a recent gig at the Comet Tavern in Seattle.

His metal minions lifted him from the floor, he regained his composure and finished the show with his hair whipping up and down, fingers throwing the horns and razor-edged, roaring voice in fuck-the-world mode.

Much like that thrasher of a gig -- during which I was belted in the head with a flying coin from the crowd; Cat also took a spill while snapping pics -- Black Breath's latest release, "Sentenced to Life," tears into the eardrums where the band's last offering, "Heavy Breathing," left off. If you've healed since then, you'll be bloodied all over again. 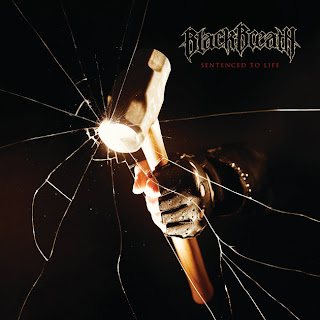 On the opening track, the band is already in full-force mode as "Feast of the Damned" fades in. "Come to me my children; as a jackal to the lamb; taste the blood of heaven; as it drips down your skin," McAdams screams as the guitars slither away. Later, the drums pound and rattle like the "Evil Dead" demon trying to escape from the cellar.

Black Breath hits you hard and often, and although the 10 tracks aren't that far off course from the "Heavy Breathing" blasts, the band does vary some of the guitar parts and song structures to give the madness some fresh blood. A number of these tunes could be likened to "Tied Down"-era Negative Approach, but taken several steps and slashing guitar riffs and solos further. (We're still waiting for a cover of "Evacuate" to creep into the band's set.)

Highlights include the marching "Sentenced to Life," the sludging "Home of the Grave" and "Endless Corpse," which begins with a taste of Middle Eastern guitar riffage and builds steam until the bludgeoning steps in.

On "Doomed," the guitars, bass and drums battle it out and McAdams unleashes an epic howl to complete the onslaught.

One wonders if bassist Elijah Nelson's headband stays firm around his flowing red hair during recording these tunes, or does it depart like it often does during gigs?

What is certain is that the guitaristry of Eric Wallace and Zack Muljat (since replaced by Mark Palm) is spot-on the whole way and they even throw in a twin-lead (or layered?) treat on "Obey" that wouldn't have been out of place on a classic Thin Lizzy or UFO album. Jamie Byrum's potent drumming also takes on a lead role in parts of some songs.

With the tunes clocking in between 1:57 and 5:12, the Black Breath and Kurt Ballou (Converge) produced album is a quick but deadly one. Grab it.