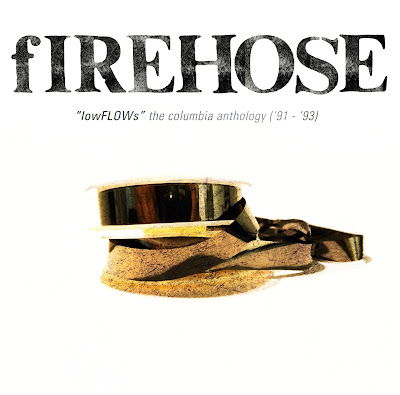 By Andy
"You make the headbutts count" -- I believe that's what Ed Crawford screams on "Up Finnegan's Ladder," song No. 2 off fIREHOSE's "Flyin' the Flannel" record from 1991.

It's a perfect statement as Mike Watt's bass and George Hurley's drums swirl around the guitarist, who journeyed from Ohio to San Pedro to get the band rollin' in 1986 after the passing of D. Boon.

fIREHOSE and the Minutemen were vital bands for me while growing up in the Los Angeles area, and whenever I hear them, I immediately think of the beach, or Olvera Street, or some dingy Hollywood club -- home.

After listening to the recently remastered "Flyin' the Flannel" and "Mr. Machinery Operator" package -- "lowFLOWs," the columbia anthology ('91-'93) -- I'm massively bummed I missed out on these records the first time around. (The live "Totem Pole" EP and a handful of extras round out the 45-song set.)

I'll say it again (and again later, I'm sure) ...I'm sorry I left the last two fIREHOSE records off my playlist during those years -- and the nearly two decades that followed. But here I am today with open (and frayed-flanneled) arms and (battered-but-pleased) ears for these gems, and the trio will never be abandoned again.

There's some full-on ragers here like "Down With the Bass," "The First Cuss" and "Rocket Sled/Fuel Tank" -- now that's a head-turner and barn-burner, for sure -- along with a plethora of familiar punchy and cracklin' fIREHOSE fare (beefed up a bit, though) like "Can't Believe," "Epoxy for Example," "O'er the Town of Pedro" and "Toolin'."

On "Formal Introduction" and "Blaze" on "Machinery," there's definitely some of producer J. Mascis' Dino Jr. stylings on tap (a good thing), and there's a touch of REM tuneage on "Witness" (a great thing), on which Crawford sings, "You're helpless, all you can do is witness."

As always, Watt and Hurley lock-in the whole time and produce stellar results, and the band invites Freda Rente into the fold to sing the shit out of "Hell-Hole." On these records, Watt is, well, Watt -- bassin' it up to the hilt; as for Hurley, he especially bangs the skins with aplomb on "Epoxy" and "More Famous Quotes" (drum-solo time!).

Although there's a few duds in the bunch (perfection? what's that?), I'm down with the fIREHOSE on these albums. Finally.