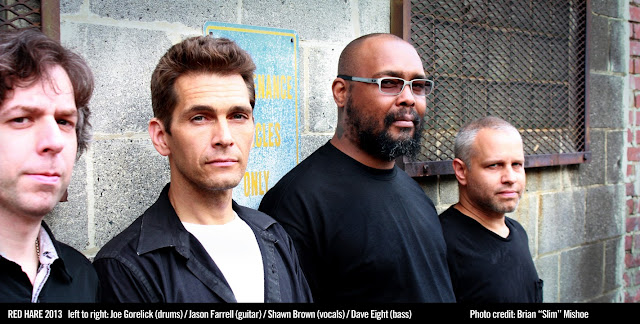 If Red Hare doesn't grab you, pull you in different emotional directions... make your eyes squint, your fists clench and your mouth grin -- you're not living, not feeling. This isn't stand- and sit-still music.

Red Hare attacks from the get-go on "Horace," the opening track off their debut album "Nites of Midnite." Guitarist Jason Farrell, bassist Dave Eight and drummer Joe Gorelick are all dialed in musically to the nth degree while singer Shawn Brown blasts forth with such lines as "It ain't coming back -- so let it go!"

Farrell's guitar crunches like six strings of dynamite at times, but then lays back with bolts of melody along the way. Eight and Gorelick stomp and sway through these eight songs with reliable hands of steel. And Brown anchors the unit with his barking vocals that tell stories of the everyman. We're with him the whole way.

On "Nites of Midnite," he sings: "Tonight we're having a party/ Tonight we say goodbye/ We'll take off these costumes/ And start living our real lives." He tells of believing in outrageous things and not being afraid... but also throwing our dreams into hell and we'll be on our way.

Those in the know are already familiar with these guys' musical output in bands like Swiz, Dag Nasty, Sweetbelly Freakdown, Garden Variety, Bluetip and Retisonic. Red Hare is now. The tunes are solid. Get on it.

Here's an email interview with Farrell with a pair of answers from Brown (where noted):

• How long has Red Hare been together and how are you coordinating everything with band members living in different states?

We emailed song ideas and worked up demos before we ever played together. It's not a bad way to work, it's just different. The last Retisonic record was done sending demos back and forth, recorded in pieces, so Joe and I are used to working remotely like this. We were happy with the results, and felt we could use this same method for Red Hare. It's a long slow process, it took a few years to get "Nites of Midnite" together... But in a way that was to our benefit. Without a deadline or goal, there is plenty of time to sit with the songs and really see what works or what doesn't. The rough demos are still very similar to the final result, but the little details that developed really make the songs complete.


• You, Shawn and Dave have been in two bands together before, what keeps you guys coming back for more as a unit?

Two things:
1) A little while back, I found myself with a bunch of song ideas that leaned a bit more hardcore. I've been singing for 18 years now, long enough to recognize my own limits... I knew I would not be able to do what these songs needed. I couldn't imagine anyone other than Shawn singing them. I love his voice and his delivery: strong and direct... So I bugged these guys and pushed this through for years. It was in some ways selfishness... I wanted to hear Shawn's voice again.

2) We are all close friends. I've known Dave since we were kids, and Shawn from shows and skating. Music isn't the only connection we share, but it is an important one I was beginning to miss.


• Describe what's happening on the Red Hare album, and what makes it fit into today's musical climate?

I really like how this record came out. It wasn't deliberate or calculated, but in some ways these songs sum up our long collective lives spent playing music. There is a similar drive and energy to Swiz, with some of the intricacies inherent to Bluetip, Garden Variety and Retisonic. We had no goal or expectations beyond eventually finishing the recording. So when we eventually found ourselves with a completed album, we were surprised and so happy Dischord wanted to help us put it out. I don't know if our band really fits in any existing/active scene, but I am glad this album has found people who seem to like it. Perhaps most of this is due to nostalgia, but hopefully not all. I don't know... I'm just glad it's out. (Editor's note: J. Robbins mixed the album.)


• How long have these songs been in the works; have riffs been lying around for a while or is everything fresh?

It's a combination: I did the first demo for "Hello Disaster" 6 years ago. "Snap" has been kicking around even longer. But I'd say true momentum clicked around 2 years ago once Joe got involved. That's when the newer songs fleshed out the set ("Horace," "Dialed in," "Nites of Midnite").


• Describe your lyric-writing process. Are these things that have happened to you or is it an outside-looking-in thing with friends, family or maybe colleagues at work? How does it feel getting these things off your chest and onto the album?

BROWN: I write songs from experiences. Some are inside observations, some are outside. Clarity, confusion, nonsense.........
What ever hits me when I am listening to a track/song and feels right, matching lyrics to the mood of the songs.
Being able to perform/record these songs has been very satisfying. A release.
Something I really needed.


• You sang with Dag Nasty at the Salad Days gig, how did that go? Was it inspirational to get Red Hare happening?

BROWN: The December 2012 show with Dag........I don't know if I can put into to words.
Out of body, time travel?
Very powerful and moving for me.
Very moving.
It felt really good playing with Rodger, Brian and Colin.


• How has your guitar playing evolved over the years? What's special about playing these Red Hare songs?

With Swiz, I was 17-20 years old, very interested in rhythmic patterns and aggressive-sounding riffs. I had a dual love of DC hardcore and metal, putting my playing somewhere between the Faith and Metallica. It was a very narrow focus. I used relatively light strings (9's) on an easy-to-play guitar (SG), which made fast "chubb-chubb" riffs easier to pull off.

With Bluetip, Dave "Eight" Stern and I focused more on two-guitar interplay. I got more into dissonant melodies over pretty chords, but kept a bit of the hardcore sound. Like a lot of post-hardcore bands of the era, our song structure got more complex at times... Maybe to the detriment of the song itself. We tuned down a half-step and I bumped up to thicker strings (10-52) thinking it made my sound "thicker," and started messing with using two amps. We toured a lot, so I heavily relied on my sturdy/trusty (and heavy) Les Paul.

My next band Retisonic went back to one guitar, and I tried to streamline the songs and guitar parts as much as possible. I used a hollow-body Gibson that had this beautiful feedback range I used often. I started using three amps, splitters and pedals to get more dynamics in our live sound... I felt this was crucial for a three-piece band. I learned the most about guitars, overdubs and general songwriting in this band, and brought in any influence we felt was appropriate.

My style of guitar and the songs I would write in each of these bands has had a lot to do with the equipment I was playing at the time. It's brutal trying to play fast metal riffs on super thick stings.... I thought maybe I just couldn't do it anymore. But one day on a lark, I strung up my old SG with some 9's in regular E tuning and there it was again; the perfect weight and tension... the bounce-back and butter for fast "chubb-chubbs."

I started writing songs that reminded me of Swiz, which made me think of Shawn, and started us towards what would eventually become Red Hare. It doesn't really sound exactly like Swiz... We bring in bits from all the eras and bands we've played in... That's what makes it special to me. 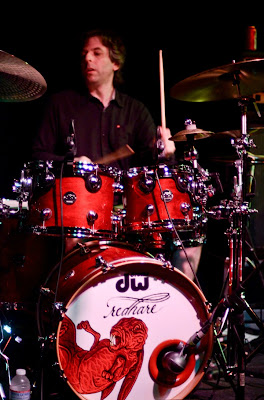 • What does your family think about you guys still rocking out these days? Are you the cool dad, husband and brother slinging the guitar?

Ha! Not sure how cool it all is. I fully acknowledge the potentially-pathetic side of old-ish guys playing young-ish music. But I'm also inspired by people who continue doing what they love, be it music or skating or whatever... Even more so when they do it well. I am happy that after 30 years I can still do some skate tricks better than I ever could (some not so much), and happy that after 25 years there are people still interested in the music we're making. But there are no illusions here. We have lives and wives and kids and jobs, and this band isn't going to eclipse those things or interrupt those responsibilities. We will do whatever we can whenever we can... but it has to fit. Our families know how much music means to each of us, they are happy we have this chance to keep playing music, and their support makes that chance possible.


• What else are you up to these days? Still doing graphic design? What's the best part about designing and playing in bands?

Coming up on 20 years as a designer, art director and creator director... It's been my main source of income, and I still enjoy it. In the past 5 years I've transitioned into film/video, having directed several commercials, music videos and short films. I love it, and love how all three disciplines (music/design/film) can come together and inform each other.


• I noticed that you led the film team for the recent Flag performance at the Moose Hall in Redondo Beach. How did you keep your camera still while the band raged in front of you? Did you come away from that gig enthused about your own band?

With the band in front of me and the crowd at my back I wasn't able to keep my camera still! But I love how that came out, and I definitely felt energized by their performance. This show could have been horrible: old guys covering Black Flag songs. But those songs are fused to my DNA, and it was amazing to see Keith, Chuck, Dez and Bill (all Black Flag alums, plus Stephen from Descendents) fucking kill it. Like old pros, so much energy.... Very inspirational, even more so that they devastated the perceived obstacle of age and time.


• What's on the docket for Red Hare?

We did an East Coast run with Coliseum in May: NYC, Philly, DC, Baltimore and Providence. It was a blast. We're now working out some more dates for this summer and fall. In the meantime, we are working on editing together some video we shot during those East Coast shows

Once we started booking shows, it dawned on us that we only had 8 songs, so we've already had to write more just to get a decent set length. We plan on recording and releasing those new songs as a seven inch soon (...hopefully not another 6 years).