What do a sweaty punk club, the Armpit, a newbie punk rocker, Daniel Desario, and a fiery band, Diesel Boy, have in common?

The "Freaks and Geeks" punk episode, "Noshing and Moshing," man.

In "Freaks and Geeks," a fictional band named "Pus" was supposed to play after real-life band Diesel Boy blasted through its tunes "Lime Green," "Happy Street" and "Punk Rock 101" during the club scenes.

We wrote a previous entry about "Noshing and Moshing" and felt we needed to track down Diesel Boy for a follow-up.

So here's an email interview with the band's singer/guitarist Dave Lake:


* How did Diesel Boy get involved with playing in the "Freaks and Geeks" episode?

One of my oldest friends, Jake Kasdan, directed several episodes of the series. When a punk band was needed for one of them, he called me. Like most of the other people involved in that series, he's gone on to have lots of success, directing several films, including "Bad Teacher," as well as serving as one of the executive producers on "New Girl."


* Where was the gig scene filmed (was it an actual gig with the actors showing up to do their parts)? How long were you on set? What was the experience like? Did you have any input in the scene?

The scene was filmed at Al's Bar in downtown L.A., a seminal L.A. music spot, which unfortunately closed in 2001. (Editor's note: Cat and Andy attended several gigs at Al's during its heyday.) It wasn't a real gig, but we were actually playing. All the people watching were paid extras, which probably explains why they seem to like us so much. There were even stuntmen crowd surfing.

We were on set for most of an entire day, and it took a few hours to get those handful of scenes shot. We played our songs a few times through while they filmed us, and later, while the actors were doing their parts, we stood on stage and mimed like we were playing so it would look real if we showed up in the background.

We didn't have input beyond picking out the clothes we wore, which we selected the day before filming from a few racks of punk attire put together by the costumer. We went to the Dreamworks lot and browsed through racks and racks of period punk clothes, trying on various outfits until we settled on the ones we liked. There was lots of leather and safety pins. The costumer basically left us alone to select things, which were eventually approved by Jake prior to filming the scene. The costumer also left us with a classic line we still throw around today: "You look good in everything," which was said to our drummer Geoff by the costumer after checking him out in his punk get-up. He wasn't wrong.

But we had a blast that day. Compared to our usual unglamorous life on the road, being on a TV set was awesome. There was food (all you could eat), someone did our hair, people wiped the sweat off our brows in between takes and everybody watching us went totally apeshit while we played. I remember sitting at lunch with Jake and eating with him while the rest of the crew looked on totally perplexed, trying to sort out just exactly why the punk band was sitting with the director.


* Did you interact with the actors? If so, what was your impression of them in their younger years?

We didn't have any interaction with them beyond a quick "hi" or "how are you doing?," but the show also hadn't aired yet and we certainly didn't know who any of the actors were at that point and therefore didn't pay all that much attention. Mostly we interacted with the homeless people who hovered around the catering table outside the venue in downtown L.A., asking us over and over who they had to talk to to get a cup of coffee and a donut.

* Did Seth Rogen slam dance properly to your tune? Was James Franco a good fit for the "punk" role or would Jason Segel have done a solid job?

In fairness, I wasn't going to punk shows in 1980 so I'm not sure I know what slam dancing "properly" would even look like. But regardless, the whole point of that scene is that those guys were totally out of place at a punk show so I think if they had slam danced properly it would have been weird. And I think James Franco did a good job at looking punk in the episode. He gets pumped up by listening to Black Flag, he gave himself liberty spikes and he let a stranger try and pierce his nose at a show. That's pretty punk. All these years later, Franco has definitely emerged as the punkest of the "F&G" alum, making interesting career choices and pursuing a variety of interests outside acting, so I think he was the right choice. 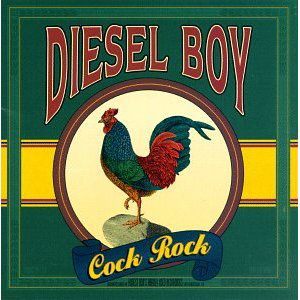 * What's it like watching that episode these days? A proud moment for you guys?

That episode didn't actually air when the show had its initial run on FOX. It got cancelled before it could air so it wasn't until years later that we got to actually sit down and watch it "live" on TV. But yeah, we are really pleased to have been a teensy part of such a great show and one that continues to find an audience on DVD and Netflix.

* "Freaks and Geeks" has become extremely popular over the years, has Diesel Boy gotten any fame out of it?

No more fame than we had previously, which isn't a lot beyond our awesome, loyal fans. For example, I have never heard from a fan, "I got into you from seeing you on 'Freaks & Geeks,'" but I have heard from lots of fans who were pleased to see us pop up on the show. And we are a cool footnote: Our songs are the only music featured on the show recorded after 1981, the year the show is set.

* What's the band up to these days?

After being active for about a decade, we have been quiet for about the same length of time, but we're nearly done writing a new record, our first in a very long time, and we are taking baby steps towards being an active band again. I played solo acoustic Diesel Boy dates on the "Hits and Pits" Tour in Australia in March, which was a blast, and once the record is out we hope to start playing full-band shows again, as well. We aren't likely to ever be a full-time band again, but we do hope to fit it into our lives as best we can, as most of us have since become husbands and dads and gainfully employed, but we've certainly missed playing music together and are super-excited to be doing so again.