Soccer Made in Germany: Our Bundesliga trek

"You must drink beer to support your team."

That is a rule, according to the red-faced elderly Monchengladbach fan speaking to a 20-something traveler on the bus headed toward Borussia-Park for a Friday match versus FC Augsburg on April 19.

First, let's backtrack: As we toddled off the train ride from Amsterdam with our online tickets clutched in hands, we asked the information man at the nearby bus station were there any cool places to hang out pre-game. He quipped, "this is Monchengladbach, there are no cool places."

Not to be denied, we wandered left through the sterile downtown area, searching for the holy grail of soccer-fan bars. We were clearly headed in the wrong direction when we saw two groups of fans headed the opposite way and we turned back. Soon, we noticed more fans with painted faces, flags and even one guy blasting the Monchengladbach song from a boombox on his shoulder.

We journeyed further and popped into a hookah lounge, which appeared to be the only open drinking establishment around. Cat enjoyed a Spanish Kiss (a creamy berry delight with vodka) and Andy grabbed a Heineken as we watched a group of ladies having a hookah-fest. As the smoke filled the air, we heard sounds from outside, and there stood the King, crown on head, Monchengladbach flag worn as a cape and an obligatory beer in hand. Game on, we said.

We knocked back our drinks quickly and headed outside to locate the King and his subjects. But he had disappeared just as quickly as he entered the scene.

So we ventured back to the bus circle, thinking we should head to the stadium. We were at a loss for any further action in that area. Right in front of our eyes, though, there was a very plain-looking building we thought was a restaurant, featuring a small beer sign and door cracked open. We thought, what the hell, and went inside.

As we entered the bar, it was as if you could hear the soccer gods and their choir singing to us. The Monchengladbach fight song -- backed by rock music on the jukebox -- was one that we would hear nearly 20 times during the next few hours. This is the place we were searching high and low for: excited fans (check), banners (check), huge soccer mural (check), punk soccer songs (check), etc. We would have been bummed had we not given this place a shot. We were elated!

We attempted to communicate with the locals to find out if there was anything to do at the stadium beforehand. As we thought we had already hit our high point for the ultimate soccer bar, their best English speaker told us about a magical place by the stadium: FanHaus.

Now, back to the bus ride toward the match. Nearly everybody had a beer in hand, except us, as we didn't know that could be done. We soaked up the atmosphere, and luckily the ride wasn't too long since we were anxious to follow the "golden rule" quoted at the beginning. 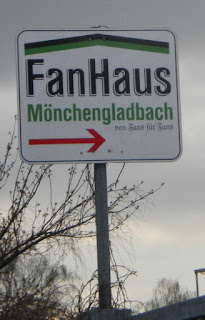 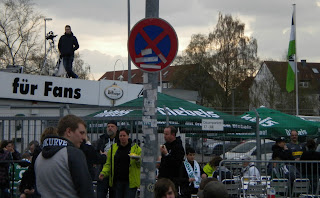 At the park, FanHaus was the piece de resistance -- the shit: beer flowing, sausages grilling, soccer fans singing, band playing ... football heaven. While partaking in our delicious sausages, Andy chatted with a guy wearing a Corrosion of Conformity T-shirt and his friends. He posed for a picture, a fry in mouth and buddies attempting to give him a tittie-twister. 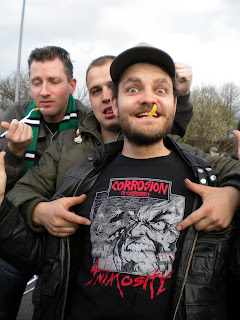 We reconvened with our new friends from the prior bar, who were glad that we made it to FanHaus. The translator lady insisted, "I am the man, yes?" about directing us to this wonderful place. The mullet guy emphatically stated, "We must drink now." Agreed upon. 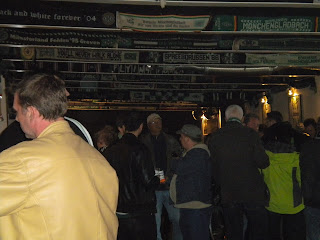 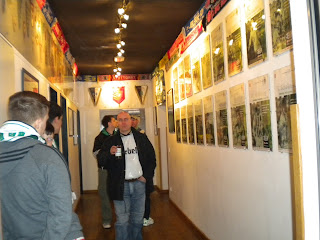 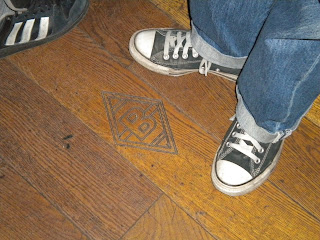 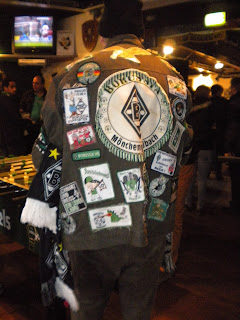 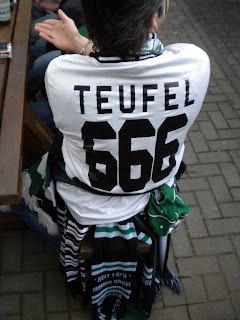 Oh yeah, the match, right? It was awesome, of course. Everything that we dreamed a Bundesliga game would be. We even imagined classic Soccer Made in Germany announcer Toby Charles' voice in our heads.

On the beer front, the wandering stadium server offered fresh-poured hops from the mini-keg backpack he wore. As he walked by, Cat got his attention by knocking on the keg to see if any beer was home. We scored with a pint of Becks ...not long before Monchengladbach scored what would be the winning goal in the first half on a PK. The home side prevailed 1-0 on this eve.

All in all, the dream of attending a Bundesliga match being achieved was worth the 4 a.m. arrival back at our Amsterdam hotel after the return trip. We slept tight, mates.

P.S. We support Bayern Munich, but Monchengladbach was the closest place to travel on our trip. They didn't disappoint. 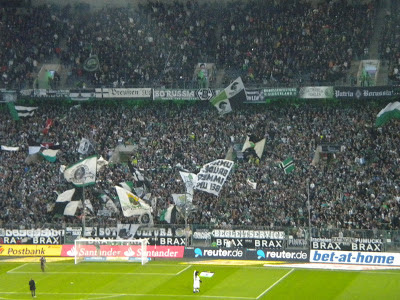 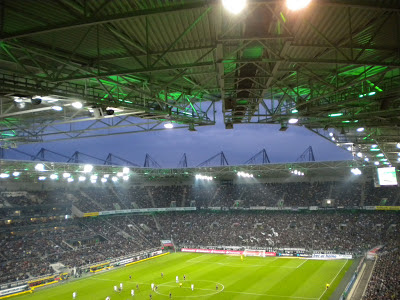