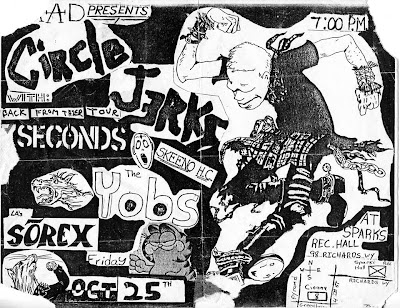 I was loafing around home one afternoon in October of 1985 -- probably planted in front of the television watching the classic hoops series "The White Shadow" and scarfing my beloved sour cream and onion Doritos and gulping down a Dr. Pepper -- when Sorex drummer Dave phoned. He had just received word from a gig promoter in Reno, Nev., that San Diego's Insolents had canceled their appearance at an upcoming show with the Circle Jerks and 7 Seconds. He wondered if we could play the gig. Hell yes, Dave replied.

Gigs were scarce for our little band back then, so we were primed -- and a bit nuts, I suppose -- to drive the 532 miles from our Redondo Beach home to play one show. But this was a gig. Period. And it was with two of the premier punk bands of that era. How could we pass this one up? Destiny was in the air, we figured.

Oh yeah, the gig was a week away, so we had to do some quick planning to make this happen.

Committing to play was the easy part. The seemingly Gargantuan tasks were finding a vehicle or two on short notice that would survive the eight-hour drive to the gig location in nearby Sparks, Nev., and usher us back home safely; get time off work; make sure there was nothing crucial on tap in our classes at junior college, since we'd be missing a day by leaving early Friday morning for that night's show. I secured my parents' Subaru hatchback for the journey, since my car wasn't in shape for a long haul, and guitarist Korky obtained a suitable car from a friend, I believe, so we were set. Bring on the open road!

The drive was a breeze, with bassist John and I in the Subaru with Dave's drum kit in back along with some amps. We were powered by Mountain Dew and the sounds of Husker Du's "Flip Your Wig" and "New Day Rising" on the tape deck ... as the kids say these days, those were our jams. The other guys -- Korky, Dave and guitarist Jerry -- zipped along the highway in their ride with the guitars and sundry items.

We made it to the promoter's house at about 1 or 2 in the afternoon, hung out at his sketchy friend's filthy house (there was a trash can in the kitchen with flies buzzing around it) for a while, but then retired to the car for a nap. We spent some time acoustically rehearsing songs with Korky (our new guitarist) on the steps of the house while sipping on Budweiser tall boys and wondering what the night would bring.

When we arrived at the Sparks Rec Hall, some locals informed us that it was a former church and the bands would play on the old altar. John and I cracked up. How fitting, since we used to be altar boys at our Catholic church in grade school. One question: was there any sacramental wine left over in a cupboard somewhere?

We opened the gig to a decent-sized crowd of about 100 people, all of whom seemed to dig our sounds. I went off -- jumping, singing and even running at the crowd, pretending that I was going to knock into people but then stopping on a dime, faking them out and drawing smiles from the punks. We did make a few mistakes, like me singing the wrong lyrics to one song because it was so loud on stage that I couldn't tell which number we were playing; Korky couldn't remember some of his guitar parts, so he turned down his amp at one point and stuck his guitar between Jerry's legs like some cheesy Sunset Strip hair band's antics. Nobody knew our songs, anyway, so what the hell, right?

The Yobs from Reno rocked, and about 15 minutes after their set I visited with Kevin Seconds in the parking lot. He missed our rock show, but said The Yobs guys told him we were good. I traded records with Kevin: our "Portrait of a Prisoner" EP for his band's "Blasts From the Past" EP. (I ran into Kevin at a 7 Seconds gig in San Jose two years later, and he said he still had our record. He handed me the microphone that night to sing a chorus or two with him.)

The 7 Seconds hometown boys were next and stoked the crowd with their punk anthems and new poppy-styled tunes. I fell victim to one of Belvy K's flying drum sticks just under my left eye that night. I reached down, picked up the piece and stuffed it in my pocket for a keepsake. I didn't have clenched fists, but I had a bit of a black eye, for sure, that next morning.

The Circle Jerks got the crowd raging, as well, and it brought back memories of the first time I saw them with TSOL at the Starwood in April of '81 -- my first gig at age 14. We didn't visit with any of the CJ's guys that night, but I did see guitarist Greg Hetson cruising through the living room of the sketchy house with a six-pack of Bud tall boys at a post-gig soiree.

As for accommodations that evening, Dave, Korky and Jerry stayed at sketchy house, while John and I befriended a nice fellow, Tim, who invited us to stay at his house. I got the rec room all to myself and slumbered on a comfy couch. Score!

The next day, John and I bragged about our crash pad as we grabbed breakfast at a casino with the promoter guy. Instead of heading home, we trucked through to Berkeley, hoping to hop on the CJ's gig at Ruthie's Inn, a place we played about a year earlier with Broken Bones, Special Forces and others. No dice gig-wise, but we did spot Metallica's Cliff Burton hanging outside with his buddies drinking beers, just like us.

Since we wouldn't be playing that night, John and I filled the gas tank with our share of the $150 the band earned and headed home. We made it back to Redondo without a hitch, blasting those same Husker tapes along the way. (I tossed those tattered Radio Shack cassettes in the trash the next day ... they had done their job and it was the end of the road for them.)