Punk rock for me in the early 1980s usually took place in dark, dingy clubs that reeked of alcohol, clove cigarettes and who knows what else was creeping into the air in those places. I didn't mind — I was at a punk gig, after all. The bands' blaring music added to the festive atmosphere, and to this day, I associate some bands with those smells.

However, we broke free from the clubs on July 4, 1983 and were treated to a solid outdoor afternoon gig for free from Black Flag, Wurm, Peace Corpse and more at the Federal Building along Wilshire Boulevard in the Westwood area of Los Angeles.

Pot was the stench of the day since this event was a smoke-in for the California Marijuana Initiative. I didn't partake, but plenty of people did, and in between the bands, speakers took the stage to spread their sensimilia spiel.

As Wurm prepared to rock, bassist Chuck Dukowski played the riff for Black Sabbath's "Sweet Leaf" and grinned at the crowd. My friend John and I smiled at each other as I tried to chow down on my pastrami sandwich while some stoned aggro dude grabbed at it and begged for a bite. An interesting start to our day, no doubt.

Wurm got the job done and then the mighty Flag took over with some Fourth of July fireworks of their own. 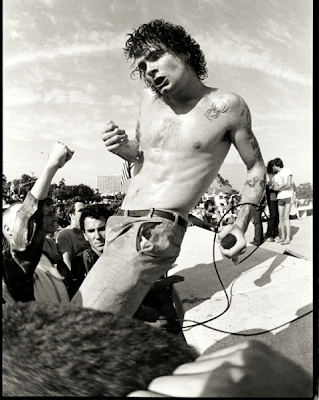 Henry Rollins worked the crowd into a frenzy, as always, as the band played a host of unreleased tunes like "My War," "Black Coffee," "Modern Man" and others that John and I dug just as much as the usual raging Flag fare.

As Dukowski, Greg Ginn and Bill Stevenson laid down the tuneage, we couldn't help but wonder what drivers must have thought as they cruised up Wilshire and peered toward the Federal Building and saw the wild scene happening on the front steps.

Definitely a gig for the ages.

Later that night, we went to a party in Gardena and tossed firecrackers at each other. One of them grazed a kid in the ear and exploded. He was OK, but a bit woozy.

His ears were probably ringing the next day, as were ours after receiving the Black Flag sonic treatment.
Posted by Andy and Cat Rose at 3:05 PM