The Chrome Cranks -- 'Ain't No Lies in Blood' / Review 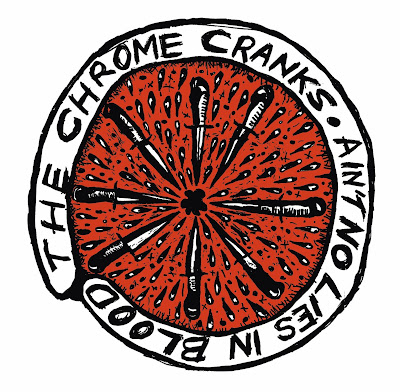 You're gonna get dirty on this one. Just deal with it.

With its first album of all-new bludgeoning ditties in 15 years, The Chrome Cranks' "Ain't No Lies in Blood" oozed into this world in February. Cat and I are blissful that this rabble-rousing foursome has finally found its way into our already tattered eardrums after 30-plus years of punk and rock gigs.

The Cranks, who formed nearly 25 years ago in Cincinnati and then relocated to New York City, are now part of the There's Something Hard in There playlist -- Cat is especially baffled why these guys have flown under our radar for so long ... well, that doesn't matter now, right? On a recent airplane ride, Cat's headphones were probably shaking as she was floored by songs like "I'm Trash," "Rubber Rat," the blood-draining, 10 minutes-5 seconds of gunk joy "Lover of the Bayou" and others on the nine-song release on Bang!/Thick Syrup Records.

Swans/Angels of Light frontman Michael Gira is pleased with the Cranks, as well.

“(The Chrome Cranks) had me screaming with joy,” he said in a press release about seeing the reunited band’s return show in 2009. “I almost threw my beer at them, I was so happy.”


Gira's knives-to-the-ass artwork graces the cover of "Ain't No Lies in Blood"; Kevin McMahon handled co-producer duties with the Cranks and has also dabbled in the varied musical stylings of Swans, Titus Andronicus and the Walkmen. They probably handed McMahon a towel to clean off after this record's completion.

On the opener, the guitars gouge and the drums go tribal as Aaron barks: "I'm trash/ dead last/ I'm trash/ fading fast."
"Rubber Rat" starts off all jazzy and foot-tapping... and then the guitars kick in, the growling is unleashed and the martinis crash to the floor.

Other noteworthy tracks are "Star to Star" with its pummeling, start/stop beats that require all listeners to don neck braces; "Let it Ring," a slow-burner that appears to have the Cranks hanging on to the tune as if clutching to their last breaths; and the steady-rockin' "Black Garage."

"Did I cause you duress?... get blood on your dress?" Aaron asks on "Star to Star."
That about says it all. And that's a good thing.
Posted by Andy and Cat Rose at 7:27 PM