When Lopez revved up its rocket-fueled tunes at a recent gig, the only thing missing was the smell of gasoline.

Cat and I were visiting Portland, Ore., on May 25 and headed down to the Hawthorne Theater to check out rockers Red Fang... and the Lopez guys ripped it up punk-n'-roll style, paving a path of destruction in the slam pit prior to the headliners' set.

We'd never seen or heard the band, but were on board with Lopez right away. We also knew they'd be a good addition to our blog, so we tracked down singer Joel Ross and got the inside story on this sonic squad.

Lopez formed in the spring on 1994 in Wenatchee, Wash., playing house shows (with Hellworms, One Eye Open, Schlong and others) and a grange-hall gig (with Gas Huffer) in that town and plenty of concerts in happening Spokane, which was home to the Makers, Motherlode, Fatty Lumpkin and tons of other bands, Ross said in a phone conversation today.

The band moved to Portland in 1998 to gig more regularly and be in prime position to hit the road to San Francisco and Los Angeles for shows. Lopez has released two full-length CDs -- a self-titled one in 2001 and a Jack Endino-recorded one, "The Sound of Alcohol," in 2005 -- a 7-inch and some split 7-inchers with Fireballs of Freedom, Bottles and Skulls, Humpy and the Automatics.

"All of us have crested the 40 mark and are climbing toward the mid-40s," Ross said of the band members' ages. In short, they've been rocking for a while now.

The band plays out about three times a year, Ross said, and usually does so to play with bands/friends they haven't seen in a while or for a benefit, such as the Red Fang gig in support of the Grant High arts department.

"I was surprised, there was a lot of kids there and they were really into it," said Ross of a host of front-row students -- one of whom was sporting a Dead Kennedys T-shirt -- who were timid at first, but became energized after getting slammed into a few times, both by the crowd and Lopez's tunes.

Since Hoff plays bass in Gaythiest and Glose sings for Black Elk, Lopez probably won't get much action until a possible September gig in Seattle and some shows with the Bar Feeders in Hawaii next February.


Aside from cranking out their loud-'n-fast originals -- which land on Zeke and Supersuckers terrain -- Lopez has paid homage to AC/DC and SST Records bands on cover nights.

On AC/DC, Ross noted: "They're super influential to anybody that plays rock."

As for the SST numbers, Lopez ripped through the Descendents' "Jean is Dead," Husker Du's "Something I Learned Today," Minutemen's "Party With Me, Punker" and Black Flag's "Annihilate This Week."

"Black Flag-- they are the first punk-rock band I ever heard. I don't think they creep so much into our music so much as they creep into the do-it-yourself ethos that we've always kind of had with our band," Ross said.

"The Descendents, they are influential for me as far as having the confidence to even start trying to sing. Milo (Aukerman)-- he obviously just has the ability to get up there and do it... just a good solid singer, good stage presence." 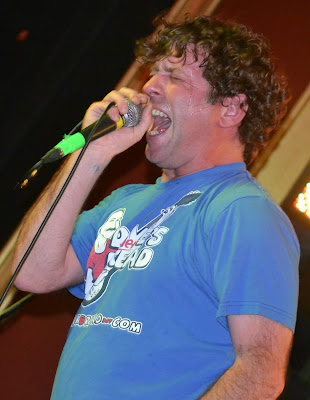 Ross' first punk show was watching the Descendents in 1985 in Seattle. He'd been to some hair-metal shows before that, but he forged a punk path after checking out Milo and crew.

"They just blew me away, the whole thing sucked me in; the fact that I could go and talk to Bill (Stevenson) afterwards when I was buying a cassette from him was huge to me," Ross said.

"The accessibility of punk-rock bands-- that really started to get me into it a lot. Seeing them live and just how much it was a one-on-one thing. It wasn't so much of like, OK, here's this huge stage with a light show and the whole nine freaking yards, and then the 30-foot barricade and then the crowd."

And things really haven't changed much since then, Ross adds, as evidenced from him speaking with Joe Baiza, Saccharine Trust's guitarist, when he was on tour with Mike Watt in Missoula, Mont., two years ago.

"(He was) just a sweetheart of a guy," Ross said. "You meet a guy like that and it just affirms that I made the right choice as far as musically, which direction to go when I was 14."

To close, I asked Ross what his top-five desert-island discs are. He reeled off a solid list:


Check out some Lopez tuneage: http://www.myspace.com/lopez
Posted by Andy and Cat Rose at 4:54 PM