Kasey Keller: It's metal and punk tunes for the former World Cup goalkeeper

Kasey Keller is into the "heavy stuff."

He's good friends with bassist Justin Chancellor of TOOL -- a band he listens to the most. Guitarist/vocalist Max Cavalera of Sepultura and Soulfly is another of Keller's buddies, and those bands get some play time in the former four-time USA World Cup goalkeeper's world.

As a teenager growing up in Lacey, Wash. (near Olympia), Keller "kind of got into the punk scene a little bit without actually being a punk," he told me recently at a Seattle-area soccer camp, noting that he listened to bands like Dead Kennedys, Suicidal Tendencies and the Sex Pistols.

Rollins actually had a mohawk early on and, of course, splattered himself with tats later, but it's the be-yourself attitude that counts. And when Rollins went from baldie to longhair to the chagrin of the hardcore toe-the-line followers, he was still more punk than any of them.

My wife Cat and I didn't adhere to the mohawk-and-tattoos side of the punk scene, instead going with the jeans, flannel (before "grunge," mind you), leather-jacket, boots, Converse, band T-shirt and thrift-store sweater look during the early to mid-'80s Los Angeles punk scene. I did crop my hair short for a while, but let it grow, shaggy beach-punk style for the most part. And I did wear a kilt over my jeans at a 999, Circle Jerks, Wasted Youth gig, but that was a one-time-only thing.

So, back to Keller.

Gangsta rap was next on his musical agenda, but he was still a punk, he says. 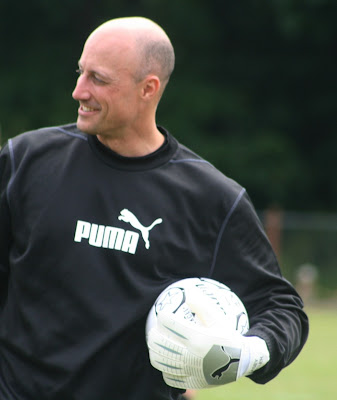 Keller, 42, played soccer all over the world before retiring his Seattle Sounders uniform last season. Prior to that, he was the first American goalkeeper to become a regular in the German Bundesliga (Borussia Mönchengladbach), the English Premier League (Millwall, Leicester City, Tottenham Hotspur, Southampton and Fulham) and the Spanish La Liga (Rayo Vallecano).

He spent his off time in England going to see metal and punk bands, but when game time neared, music wasn't going through his head.

"The hard part about being in goal and listening to metal is you can't be wound up. If I'm a linebacker, and OK, for this three seconds I gotta crush whatever's in front of me, that's one thing. But in goal, I could come into a game, put my headphones on and... 'aaarrgh!'... the ball's at the other end for 44 minutes, and then for one minute, I'm going crazy-- there's no way I can sustain that," he said, noting that he's got to get fired up for games, but stay focused at the same time.

"I still don't understand how somebody can truly be focused and are listening to anything," said Keller, who's currently on the Sounders' broadcast team and has done some Euro Cup 2012 games, as well.

From hanging out with Chancellor, Cavalera (both huge soccer fans), the System of a Down guys, Dave Grohl and some of his fellow soccer players, Keller has found that "musicians wanna be athletes and athletes wanna be musicians. I can't play anything or sing or anything, but I just appreciate what they're doing."

To close out on a punk note, Keller raved about seeing Social Distortion in Seattle in February of 2011 on his blog and saying hi to Mike Ness and the band before the gig.

Ness dragged me -- age 14 -- backstage at a Black Flag, Adolescents, DOA and Minutemen gig in '81 at the Santa Monica Civic, and I saw the band many times in the '80s.

It's nice to see that Keller is keeping the Social D. support alive. 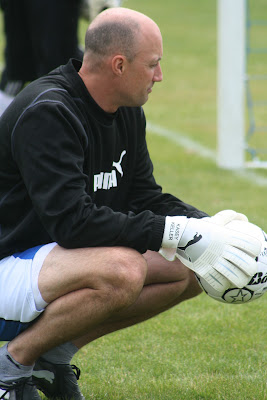