Seattle's Alcohol Funnycar revs up the rock at reunion

Alcohol Funnycar had been parked in the back of the garage for 16 years, gathering dust and cobwebs and sitting there alongside the busted skateboard, rusty golf clubs and boxes of once-fitting clothes.

On Friday night, original members Ben London (vocals/guitar) and Tommy Bonehead (bass) brought newcomer Rob Dent (drums) along for a blazing musical reunion ride at the Funhouse in Seattle. The gig took a handful of twisting pop, punk and rock turns along the trek, and the band raised a proverbial victory flag in the end.

Cat and I had seen the band just once before: June 22, 1994, at the Bottom of the Hill in San Francisco. We were primed for some AFC action and got it in the form of songs like "Aggravation," "Get it Right," "Objects," "Red Wine," "Tumble Down" and other tunes from the band's "Burn" EP and "Time to Make the Donuts" and "Weasels" LPs.


"16 years pass, and you listen to it and you play it and rediscover it -- in this case, I'm pretty proud of it, I really love it," Bonehead (Simpson) said after the gig. "My whole skateboard team came here. They're pretty critical, they like real things, and they seem to like it, get something out of it ... as did we."

Speaking of the Jak's skateboard team, its Absolute Music Fest was an ideal event to get AFC rolling again, said London, noting that the band played a Jak's reunion on its first tour in Petaluma, Calif., in '91 or '92. Local Jak's member, Bruce, and Bonehead put the gig together and AFC were on board.

"It was great, it was fun. I feel lucky, I'm 45 years old, I played in bands almost my whole life, and the fact that we can get together and do this and anybody even cares is like the greatest thing in the world," London said. "The fact that anybody wants to hear it is awesome." 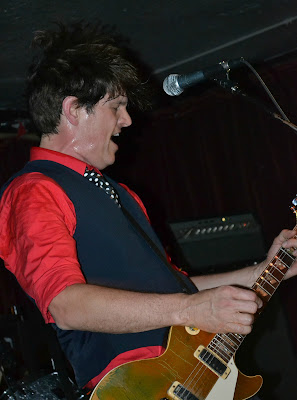 The AFC lead man was stoked to see some old friends at the the gig... and revisit some old tunes.
"I was talking to my wife and a couple other people, and I forget sometimes the life these (songs) have in other people's lives, not just in mine," London said.

"(It's a) really weird sensation, going back and learning songs you wrote that you don't remember the lyrics or the chords to," London added. "I write a lot of songs -- or try to -- and so they kind of get pushed to the back of bus. It's kind of like looking at pictures of yourself from high school or from college or something like that, where you're sort of like, 'What was I thinking? Was that haircut really a good move at that time?'

Bonehead flashed a smile -- with one missing tooth -- often during the gig and he and London were clearly connecting musically and personally the whole way.

It's always been that way, said Bonehead, who also plucked the bass in Love Battery, Crisis Party, the Crotchrockets and the Miserables.

"Ben and I, early on in our relationship, had sort of an immediate connection. I can remember the moment, the first time we strummed guitars together, there was something there," he added.
"When we decided to dissolve this, I think we expected to do some more stuff once in a while, and we just exploded off into parenting and other lives. But with all great relationships, when we came back, it just feels like you're right back there again. You look at your homeboy, and say, 'Are we doing this? ... then we're doing it'...it felt really good."

As for Dent, he takes over for former drummers Buzz Crocker ('91-'93) and Joel Trueblood ('93-'96) and is fitting in with the AFC guys quite nicely. His old band, Jackie on Acid, played with AFC back in the day and he has drummed in London bands Sanford Arms and Burning Rivers and currently bangs the kit in Stag.

"I'm riding the coattails," Dent joked about playing with AFC, which recorded a session for Seattle's KEXP 90.3 FM and will play the West Seattle Summerfest on July 14.

"The thing for me that's really interesting about it is that I've been playing with Ben for so long now, since '98. It was really fun for me to dig into this music because I felt like it was kind of like getting to know Ben all over again, from this time before I knew him," Dent said. "This whole group of songs (are) so different than what we've been playing for so long, and on top of that, it's really, really fun to play-- just balls-out rock, great tunes. It's always great to discover a new band, right? And I felt like I was doing that, and on top of that, I got to play in it."

As AFC's set neared its end, London took a minute to honor his friends Mia Zapata and Stefanie Sargent, who are no longer with us. Zapata of The Gits was murdered in '93 and "Sarg" of 7 Year Bitch died of a heroin overdose in '92.

"But we're happy to be here and I feel like it's important to acknowledge how great it would be if those people were still here, too." 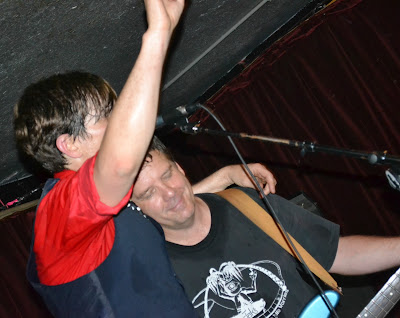