While serious discussions and punk-rock songs about current events are enthralling and vital in interacting with others, learning about world issues and shaping our views and listening to others’, sometimes you just need to set them aside and take a respite from the tug of war.

And sing about stealing office supplies.

"Humorless punk rock, isn't that one of the worst things in the world?" muses Ben Merlis, vocalist/guitarist of Surprise Vacation -- a Los Angeles punk band that spews forth melody yet punches you in the gut -- over the phone last Saturday.

But while we're chuckling, let's dig deeper into the band's psyche:

Merlis continues: "It's like 'Lights Out' by the Angry Samoans, hey let's write a song about poking our own eyeballs out, except 'Stealing Office Supplies' I'd like to think actually does have a message in addition to the humor, which is companies taking away people's health insurance and benefits and cutting their wages and treating them like shit, and so the very least you could do is steal a couple pens or a staple remover. Rebel in your own little way."

And that leads us into a discussion about the band's self-released debut album, "Stealing Office Supplies," which should be devoured and praised by fans of spectrum-spanning bands like Dag Nasty, Generation X, Naked Raygun, the Replacements, Ruts and well, you know, the good shit.

The band -- which began playing gigs in 2012 -- is rounded out by drummer Javier Cruz and bassist Wyatt Lavasseur.

ZZ Top's Billy Gibbons has lauded the album and that stokes the band to no end.

"There were many years that went into it between writing the songs, recording it and finally getting it mastered, hitting up every record label we could think of, having them all either turn us down or ignore us, and then finally putting out the record ourselves," said Merlis, who works for his dad's PR agency MFH, which represents ZZ Top. "It's been a long process, so hopefully we're gonna see some payoff. And I don't just mean financially, but people like you saying the record sounds good."

Added Lavasseur: "I'm really happy with the recording, I think our second time around recording some of these songs really proved how much tighter we got as a band after going through a few guitar players and just focusing on filling these songs out on our own without one (a second guitarist). Ben still wrote and played the extra guitar tracks, which I think add a lot, but in terms of defining a full sound live, it brought us to this point."

Cruz feels the album is a stellar representation of the band and is glad it's finally seeing the light of day.

The drummer said the best parts of being a part of the Surprise Vacation crew are "hanging with Ben and Wyatt. Our shows are always hit or miss, which is okay, because music isn't about playing insane shows for me. It's about making music that I'm into with my friends."

For many years, Lavassuer focused only on art, which he described as mostly a solitary practice. Since joining Surprise Vacation, he's hooked on playing fast and combining forces with Merlis and Cruz.

"Playing music live is not only a co-dependent challenge, it's also on the spot, there is no erasing or undoing...which makes it really exciting for me," Lavasseur said.

As for Merlis, he's got copious stories to tell about the band's songs, and here we've got a track-by-track rundown from the new album:

It's about having a significant other who is driven nuts by everything you do.

That's about sometimes the things we love actually hurt us. An example of that is prolonged exposure to loud music causes tinnitus. You do this punk-rock thing because you love it and it's actually hurting you, it's making you go deaf. And then, I'm a skater, and I've broken bones riding a skateboard and gotten stitches over my eye.

That one was inspired by a supervisor at my old job who would be very nice to people and then dicks them out of raises. It's funny, I was in all these hardcore bands, and now I'm finally in a band that is not a hardcore band and I wrote a song about being stabbed in the back. That's such a typical, generic topic for a hardcore/straight edge band to sing about. OK, now I'm ready to have a song about being stabbed in the back from personal experience.


"Rock and Roll Fuck Up"

That's really one of the only songs that doesn't relate specifically to me. It's just an observation that there's this entire class of people who, their idea of "rock and roll" is wearing the leather jacket, never bathing, sleeping on couches and being a fuck up, basically. To kind live up to some sort of template of what living the rock and roll lifestyle is supposed to be. I like Johnny Thunders' music as much as the next guy, but it seems to me he didn't make very good life choices, so why follow in his footsteps?

I came up with the name of the band before I had an idea of what that term should mean and before I had the song. I said to my coworker at the time, "Alright, I've named the new band, Surprise Vacation," and he goes, "That's great, it sounds like a euphemism for getting fired." And I'm like, "Wow, I never even thought about that" and then I wrote a song about getting fired, which is "Surprise Vacation." So it was kind of like a reverse engineered band name.


"(You Turned My World) Upside Down"

That's about falling in love with someone who lives really far away and you can't really do anything about it. A million songs by a million different groups that kind of touch on that topic.


"Look Back in Anger" (Television Personalities)

That's my favorite song by them. If you listen to our version and their version, we kind of change up their rhythms on some of the parts just to kind of give it our own touch. It's not a completely straight cover. (We chose it because) You can just tell that he's sincerely pissed off and hurt by a relationship gone bad.

"Head Over Heels" is about when I was in Bad Reaction, we played this show with Ill Repute in Oxnard. When we were driving there, from LA to Oxnard you've gotta go down this really steep grade on the 101 freeway, and one of my tires went out and I lost control of my car, and this is with the rest of the band in the car and all the equipment, and the car rolled two or three times on the freeway, hit the center divider and stopped. We all ran out of the car. I didn't realize this until the next day that the two guys in the back -- Cash the singer and Nick the drummer -- weren't wearing seatbelts, so they actually held onto the seats in front of them as the car was rolling. (They later played the show after Merlis went to the emergency room and had his head "superglued" because he had a gash there. Jesse the bassist got whiplash. The two guys wearing their seatbelts were the only ones injured.)


"The Kids Don't Know What They Want"

It's basically about someone a lot younger than me that I was in a band with who was being flaky at the time and always changing his mind about what kind of music he wanted to play. That's it. 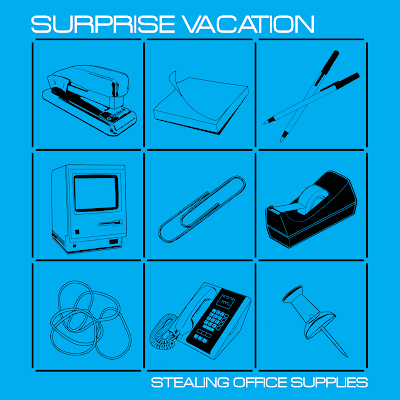