Backstage passes: Tales from the tour bus to the food tray 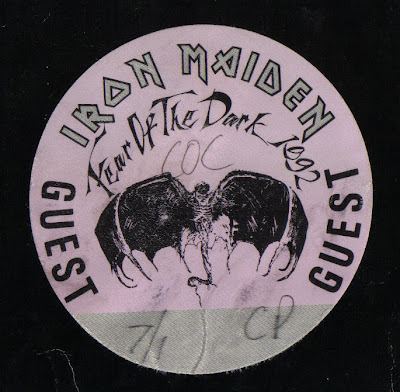 *Iron Maiden/Testament/Corrosion of Conformity at the Cow Palace in Daly City, Calif. (1992)

First thing I can say here is that small me stood head to head with Maiden's Steve Harris and Bruce Dickinson when they cruised past the backstage crowd. Give me a guitar and a wig, and I'm in. Earlier during Maiden's set, they could have used me as an extra roadie or at least had some extra duct tape in place to stop their stage-length, huge banner from falling.

After waiting for what seemed like an hour or so after the gig, guests were finally OK'd and led into the separate band rooms to partake in food, drink, whatever. The backstage scene was pretty tame on this evening, and we moved onto the COC bus for some discussion about how the opening bands are told when and where to be, no questions asked. There didn't appear to be much freedom on the tour, but the boys were having a blast.

As they prepared to hit the open road for LA, Clifford from Bl'ast! jumped on board for the ride and I drove his buddy back home to the Los Gatos area. I would have liked to skip work the next day and hitch a rock-and-roll ride, as well. I'd be back on the COC bus a few years later ...

Probably not my finest moment, and I wouldn't recommend too much daytime drinking and smoking cloves on very little food. But it was a fun show, and MM's Dave Wyndorf either was or wasn't in top form, either (depending on one's point of view) when he greeted the crowd with, "I'm fucking tripping!" before the band launched into its heavy set. COC tore it up, as well, and the band's tour bus featured James Hetfield of Metallica hanging out and telling one of the guests on board, "Aww, you just want to bang that guy in Ugly Kid Joe." Choice words for a festive day. 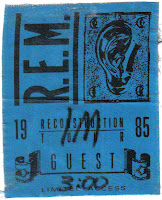 I went with my girlfriend, whose family was tight with The Three O'Clock's guitar player Greg Gutierrez. Both bands played well, and we were pleased to hear REM play stuff like "Green Grow the Rushes" from "Fables of the Reconstruction," as well as the older tunes.

We slipped backstage afterward, and chatted with Gutierrez, who offered to produce my band Sorex's next recording session. That never happened, but it was a nice gesture, anyway. He pointed toward Michael Stipe in the corner, who was talking with a few people, and asked if we wanted to meet him. We passed, and I believe my girlfriend was a bit nervous to go over there. They wished Gutierrez a happy birthday, and I think we ate a piece of cake. Not bad.

REM setlist that night (from http://enananen.blogspot.com/):

Another friend invited me along to this one ... maybe it was because he needed a ride ... whatever the case, I gave the old Subaru a night out in Berkeley. Had a slice of pizza at Blondie's (nice Debbie Harry tie-in) and 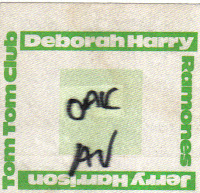 got into this gig for free because said friend knew the Ramones and their crew. Watched Harry's soundcheck (awesome) and made our way backstage to eat dinner with members of the Tom Tom Club and their kids. Note: if you're ever backstage, partake in the food spread ... at least nibble on something just to say you did.

I remember my friend Phil shaking his head when I showed him the pass at the gig, because he was a huge fan of all these bands. I offered to give it to him to check things out from the back, but he was happy to pogo along in the pit.

*Lollapalooza at the Shoreline Amphitheater in Mountain View, Calif. (1993)

This was a work day for me, reporting on this event for the Mountain View Town Crier. But, c'mon, it was all play, especially when I got to hang out with my cousin Eric and his high-school buddies who made their way up from Morgan Hill and rocked out only like Acorns can. (School mascot, by the way.)

Saw and reported on sets by Rage Against the Machine, Babes in Toyland, Mercury Rev, Front 242, Tool and Fishbone. The Avengers' Penelope Houston played an acoustic set in a small grass area, and my friend Wayne and I were stoked to hear "Corpus Christi," and we slam-danced a bit in honor of that song. (Not much backstage action on this day, as I opted to hang out in the crowd, recline in the lawn seating area and laugh about how I was getting paid to do this.) 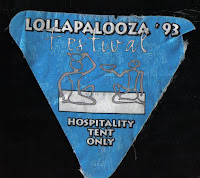 Here's how I described Tool's set for the paper:
Before Tool, a demented chain-saw juggler came on stage yelling at the top of his lungs, did a few bad impressions, whipped the saw and some dolls about, stopped to chug a beer ... and left.
I couldn't think of a better opening act for Tool's grinding metal ... matched with Maynard Keenan's wicked body convulsions and vocals, it's almost trance-like. At one point in the 45-minute set, while the Jamaica Jerk food booth was in danger of being toppled by the reeling crowd, Keenan looked almost angelic with the blue sky behind him and his mohawk blowing in the breeze.

I left before Dinosaur Jr., Alice in Chains and Primus (whom we'd seen before) because I had to beeline it back to San Jose to catch The Gits at Club Oasis with Carrie. That was the right decision, because getting a chance to see Mia Zapata (RIP) and company was more important than seeing those three other bands combined.
Posted by Andy and Cat Rose at 1:14 PM