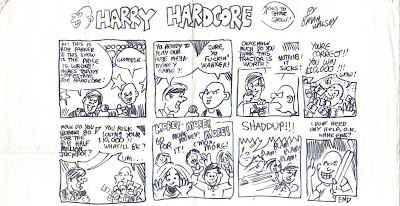 What you see here is an early cartoon by Brian Walsby that we resurrected from one of Carrie's boxes of memorabilia. The then-Simi Valley, Calif., resident sent the drawing to Carrie and her crew via snail mail in 1985 or so and has now found its way into the present for your viewing pleasure.

Walsby, of course, is known for drawing countless punk cartoons that have adorned album covers, fliers, books and T-shirts. He's a master of the pen and displays a mighty sharp sense of humor.

Strangely, I never actually talked to the guy until I visited him in his new home of Raleigh, NC, in the summer of '86. I'd always seen him around gigs in the LA area when Corrosion of Conformity rolled into town. We were both friends with the band, but apparently we were too cool to speak to each other ... ha ha. Anyway, when I arrived at the airport in Raleigh, I was greeted by COC drummer Reed Mullin, who playfully pushed Walsby into my path. We rarely stopped chatting during my 2 1/2-week stay and have kept in touch as pen pals through letters and via e-mail ever since. Aside from that Raleigh trip, I've only seen him one other time -- at Gilman Street in Berkeley at a Bl'ast! gig in '90. 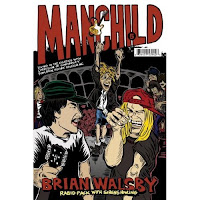 So to the present ... Walsby recently released his fifth Manchild book, titled "Rabid Pack with Sirens Howling," about his relationship with COC and involvement in the Raleigh music scene. There's plenty of cool cartoons, pics and interviews in there.
Do yourself a favor and check it out at: http://www.bifocalmedia.com/index.php
Walsby's blog is solid, as well: http://introvertedloudmouth.blogspot.com/