Just what goes on inside that mysterious tavern? 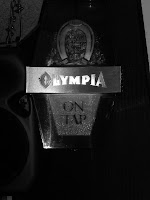 As the vintage Olympia Beer sign turned, bands rocked out on the miniscule stage to the left at Saturday night's Rock and Roll Circus (organized by Stag).

Welcome to the world of Darrell's Tavern in Shoreline (just north of Seattle, for you out-of-town-readers), where adult beverages have been served since 1967 -- and where tunes of various genres reign supreme these days. Whether it's the DJ cranking Nick Gilder's "Got to Get Out" or Stag pumping out its Cheap Trick-inspired power pop, this place is, simply put, a hit.

Following sets by alt-country groups The Diving Bell, Kasey Anderson and the Honkies and The Glass Notes (and before '60s popsters The Moon Spinners), it was a Stag party with pogo-stick-like singer Steve Mack as the ringleader. Guitars wailed and drinks flowed as the crazed frontman sang his guts out on a host of stellar Stag originals and Cheap Trick's "He's a Whore." "Cheap Trick covers never get old," Mack
announced.

Agreed upon.
Posted by Andy and Cat Rose at 8:08 PM