There were a lot of great shows at UCLA during the time I attended, but this one stood out the most.  As my friend Caryn and I sat in the very last row of our auditorium classroom for an evening poly sci class (can't remember it now, but it was one of the only classes at UCLA that I got an A in), I was not listening to the Prof.  I was concentrating on refilling the Jack Daniels in our large UCLA plastic drink mugs, which held a smidgen of Coke (when I started UCLA, I assumed The Coop was a bar, but had I known it was a dry campus I might have seriously contemplated going somewhere else...).


As soon as the last words of the lecture were uttered, we ran out of that classroom like escaped mental patients.  My friend Bridget was meeting us to consume additional quantities of alcohol before we went in for the show.  First up was Big Drill Car and I was stoked, as Andy had gotten me into them and this was my first time (of many) seeing them.  The place was rockin' for their set and it was packed.  But compared to L7, it was like milk and cookies in grade school. Once L7 started, it was mayhem---the pit was out of control, bodies flying.  I do not think the people in charge had any idea what they were in for, as after only a few songs it was over.  They pulled the plug before my friends and I barely got into our buzz. 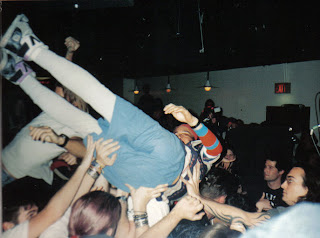 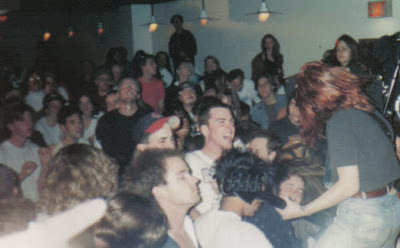 Even though it was only a few songs and I had seen L7 before and would see them again, it was one of my favorite shows of theirs and definitely the best show at UCLA when I went there.  (P.S. our buzz was not totally lost, as we proceeded to run around the campus and took some illicit photos with the large Bruin Bear statue in the front).
Posted by Andy and Cat Rose at 7:16 PM