That was Jake Burns screaming from the stage during an unwanted break in Stiff Little Fingers' raucous set July 4, 1981, at Perkins Palace in Pasadena, Calif.

Some jokers had set off a bunch of what sounded like heavy-duty firecrackers in the balcony area that left some people scurrying left and right and had singer/guitarist Burns downright pissed (I don't think anyone was injured). I was checking out the gig by myself in the seats, not knowing where my friends Mike and Brian were watching the action from Northern Ireland's finest band ... or the best group from anywhere. Didn't matter, as I was digging the tunes spewed forth from SLF's latest "Go For It" album and a batch of earlier, killer songs that would become some of my all-time favorites.

I remember the band jumping about, and it seemed like they had springs in their shoes and could hit the ceiling of the place. Guitarist Henry Cluney sported a Philadelphia Flyers hockey jersey and there was plenty of pogoing and smiling faces in the crowd. 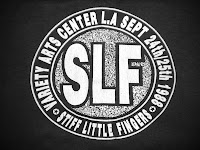 Earlier in the evening, Canada's DOA -- with the formidable Joey Shithead at the helm -- and one of Orange County's top groups the Adolescents ripped it up, and caused me to enter the vaunted slam pit for the first and only time in my concert-going experiences (I wasn't scared of the pit, it just wasn't my thing).

SLF broke up in 1983, and I didn't think I'd ever see them live again. But those records were a mainstay on my turntable, and I still feel Burns possesses one of the most distinct, powerful, rough and melodic voices of all time. (Yes, I even enjoyed his Jake Burns and the Big Wheel stuff, which some found to be wimpy, but you can't help but praise "She Grew Up.")

But the punk-rock gods smile upon us sometimes, and come 1987, SLF came roaring back into existence. In '88, they played three gigs at the Variety Arts Center in Los Angeles on Sept. 24-25 (these were the only gigs on the tour and featured opening acts All, Lunchbox and Lifeline).

Thanks to friends Donald and Marie, tickets were secured for the two Saturday night gigs and one Sunday evening show. I blew off my Friday classes at San Jose State University and road-tripped it back home (I'd be a fool not to, right?) for the SLF trifecta. They played pretty much the same songs in the exact order all three gigs, but we didn't care -- it was SLF, these were exclusive gigs and that's all that mattered. It was a perfect weekend, and driving back to school on Monday (no classes again) was tough, but when your plans come to fruition, you've got to be absolutely stoked.

And SLF kept coming at us over the years with new albums like the brilliant "Flags and Emblems" and more gigs. (Bruce Foxton from the Jam also handled bass duties for many years, which gave the band an extra edge. "Smithers Jones" was a welcome addition to the set, as well.)  I've since seen the group with Carrie in Seattle, San Francisco and several more times in the LA area. They're still kicking up a racket these days, and that's a very good thing. 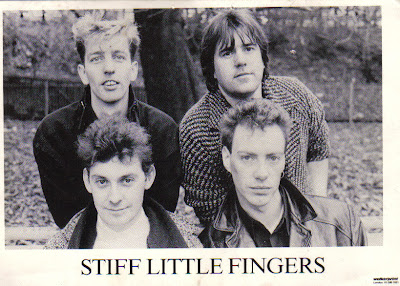